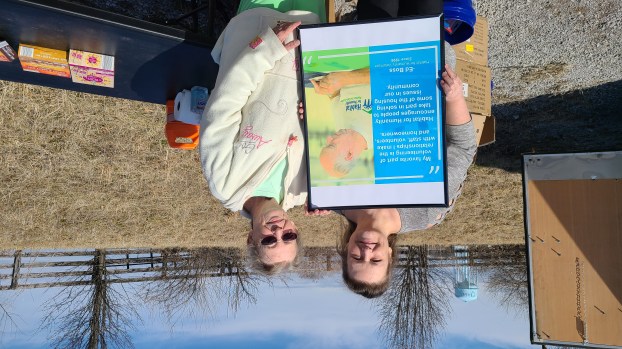 Mary Boss and Tabitha Geers said that the cleanup was an excellent way to honor the memory of Ed Boss. (Photo by Warren Taylor)

On a blustery Friday, dozens of volunteers fanned out over miles of Winchester and Clark County roads to clean up litter and raise money for charity, all in the memory of Ed Boss.

Boss, who passed away last November, was a prolific volunteer with several local organizations, including Habitat for Humanity of Madison and Clark Counties.

Habitat and the Clark County Roads and Solid Waste Department decided to team up a few months ago to sponsor a memorial cleanup to honor him.

“When Mr. Boss passed, she (Hope Broecker) asked if we could do a combined litter sweep. I said it was a great idea,” said Allan Curtis, the county’s road supervisor. “We made some maps and found about 16 routes that are high profile with a lot of trash.”

Broecker is Habitat’s construction manager and volunteer coordinator for Madison and Clark counties. She said that the event was an excellent way to raise money and remember a good man.

“We thought, why don’t we make this an annual event, raise some money for Habitat, remember a good friend and volunteer in Ed Boss and clean up the community,” she said.

The fundraising comes through a unique grant given to the road department.

“The energy and environment cabinet, through the department of solid waste, give the county grant money to do litter abatement, and litter sweeps are of the main areas of concentration that we try to do,” Curtis said.

The grant promises $100 for every mile cleaned up by a participating organization.

Broecker said that the day’s goal was to clean over 20 miles of highway and raise over $2,000 for Habitat.

The majority of the 60 volunteers who signed up came from Eastern Kentucky University’s greek system.

“We all were really excited to sign up,” said Kelli Stivers, “With COVID going on, we really haven’t gotten to do a lot of in-person volunteering activities … We are excited to get out in-person and get hands-on instead of doing petitions and online cards.”

Stivers is a sophomore broadcasting and electronic media major and a sister at the Kappa Alpha Theta sorority and explained that philanthropy is a vital part of Greek life.

“We try really hard for each of our girls to get about 30 service hours to help out our community,” Stivers said.

The road department needed the student’s help too.

Curtis said that the department could not hold as many litter sweeps as they would have liked because of the ongoing pandemic.

And during the last two years, the garbage on the side of the highway has piled up. The result has not been good for the environment.

“The trash is starting to get really, really bad,” Curtis said. “A lot of this does not break down and is constantly blowing around. So, not only is it unsightly, but it starts to infiltrate your storm sewer systems and runoff, things of that nature.”

One thing is clear about Boss just from talking to those that knew him best, he loved helping his community.
“He was very community-oriented. He did a lot of outreach. He worked in all kinds of stuff. He cleaned up our road, he did the river sweep, and he gave to Habitat,” said his wife, Mary Boss.

Pitching in and lending a hand was just who Boss was.

“Dad always believed in giving back to any community that he lived in,” said his youngest daughter, Tabitha Geers. “He always tried to do something and constantly got involved.”

Boss was an electrical and mechanical engineer by trade. His family said that when natural disasters hit Winchester, he was always ready to lend his expertise in any way possible.

Keeping the community clean was something that Boss impressed upon his family.

“When my kids were children, when we went anywhere, if you took something in, you brought it out. He did not believe in making Kentucky dirty. There is nothing that would make us madder than to see people littering when there was a garbage can sitting there,” Mary Boss said.

The family hopes that the cleanup will become an annual event and said that Boss would not have wanted something like it done in his name when he was alive.

“Dad was a very humble man, so something like this when he was alive would never have happened. He did it because he loved the community and the people,” Geers said.

The event is a fitting tribute to Boss and was greatly appreciated by his family.

“It is very uplifting for us to know that people care enough about him and that his memory will continue to live on doing the things he loved,” Geers said.