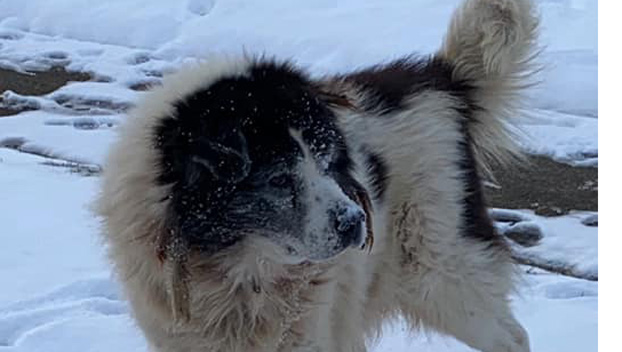 Romey, a large and fluffy feral dog with a Facebook group dedicated to reporting his whereabouts, a bevy of volunteer caretakers and pet blessing boxes named in his honor, was reportedly hit by a car on Mount Sterling Road.

Holly Lovings, who helps operate the Romey Facebook group, received the initial call about the incident last Monday.
Soon his usual caretakers, Heather Rose and Maria Cupp, and several other volunteers were out looking for Romey.

The dog was incognito for most of Monday and was located a few hours later, seemingly in good health.

So what happened exactly?

“The lady saw it through the rearview mirror, and she thought that he went under it,” Rose said about the incident. “The way she described it, it was kind of like a little SUV.”

Since Romey is a larger dog, Rose does not think he went under the vehicle entirely.

“I’m thinking that it may have bumped him and went on about himself,” she said.

Rose said that she and Romey’s other caretakers kept a close eye on him for the rest of the week.

So, what is the verdict on Romey’s health from those who know him best?

“He’s seemed fine,” Rose said. “He is so street smart it just shocked me that a car would bump him.”

One thing is for sure, the community was concerned about its unofficial town dog.

“My phone blew up with everybody asking if he was okay. Even the [emergency dispatch] called the shelter wanting to make sure that Romey was okay,” Rose said.