WHAT DO YOU THINK? Citizens Respond to Matters Between City Hall and Cartwright 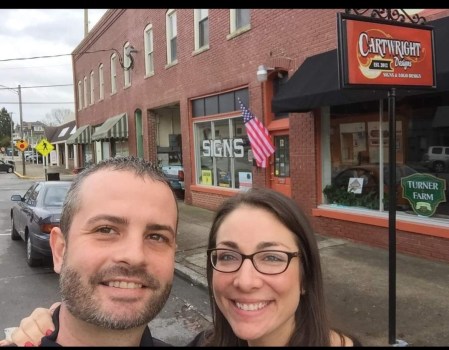 Wes Cartwright and his wife, Melisha, were all smiles on the day they purchased the building on E. Broadway St. (Photo submitted by Wes Cartwright)

Winchester Sun recently published a series of stories about how City Hall and Wes Cartwright are working through a property dispute that inspired our readers to share their opinions.

Cartwright is the owner of a building located at 12 E. Broadway St., property that was damaged during a flood downtown in October. While the deluge of rain didn’t help matters much, the building’s structural integrity had long been compromised by Town Branch, a subterranean creek that had long been built over to reduce flooding downtown.

Long ago, folks in that end of town were called “frogs” because they lived in an area prone to flooding, high water events maybe made worse by the creek swelling. Problem was that while man can direct water, water has a proven way of redirecting man’s intentions; water can play the long game far better too.

Question becomes should Cartwright have known better to invest in an older building located in an area long known to be prone to flooding and drainage issues; essentially did he assume the risk, to borrow a legal phrase.

Or, if the city knew about the drainage debacle for many years, why didn’t it react accordingly not only to preserve public safety, but reduce the risk of property damage?

What should the city do to make Cartwright “whole” again, to borrow a legal term long used in common law. In January, the City Commission voted to approve an order signaling the city’s intent to purchase the building for $225,00 and then demolish it. Will that solve the problem for the other structures affected by the waters flowing below?

Cartwright has invested a lot of time and money into the property, so si $225,000 enough to make Cartwright “whole” again?

Our readers responded that the city has a duty to property to fix the drainage problem and give Cartwright more taxpayer money. When the most recent story was posted Friday to Facebook, the article reached more than 5,200 people who left 31 comments, probably the biggest story of the week. Sampling of comments are unedited:

Donna N Wolf Born: The city needs to fix this problem and all the other problems with the drainage. They have known about it for years. The owners should get full value not low ball. Do what’s right Winchester for this business owner if not it shows you don’t care about the small businesses in our town!!!

Craig Caudill: Water issues on this portion of Broadway has been an issue since Winchester was founded. Any business located there knows, or should have, and be prepared for this eventuality. It’s a money issue for me at this point. Which is less costly, condemning and purchasing or fixing the drainage issues that infrequently come. I vote you use the least amount of my tax dollars needed.

Stephen McIntosh: Whatever is decided it’s going to cost the taxpayers in Winchester, not the City. I’m with Craig Caudill, take the least expensive route, but make it right.

Phyllis Clem: The city needs to fix the problem, it’s their responsibility. The city also needs to pay Wes for lost income since this is a city problem not the business owners fault.

Carol Deeble: All Winchester businesses need to band together on this and force the city to do something about it. Strength is in numbers. How many more floods, destroyed businesses, sinkholes, etc. need to happen before they do something? Lucky no one was killed in the last flood but next time might be different.

Tracy Gillespie: This drainage problem should have been fixed years ago! It should never have been allowed to cause this devastation!
Roy Bowen: The city has known of this problem for over 20 years just like it’s known of the defective storm sewer in Winn Ave for the last 14 year, but still they do nothing. Just like 13 years ago when my company RS Guitarworks sued the city and won, it’s going to happen again because the city won’t fix these issues or step up and do what’s right for the businesses that were financially hurt by their negligence.