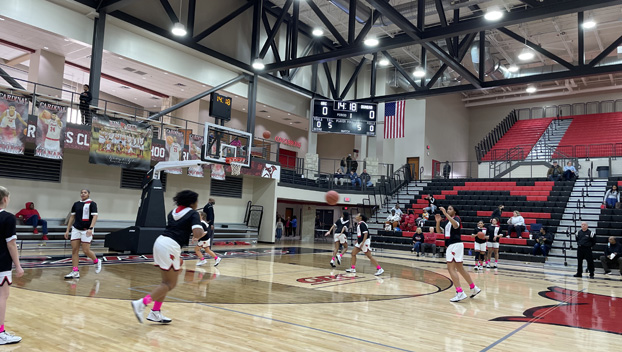 GRC Lady Cards warm-up pre-game to be prepped and ready for tip-off Tuesday against Paul Lawrence Dunbar High School's Bulldogs. Led offensively by Brianna Byars’ 21 points, Lady Cards jumped out to a 10-0 lead en route to a convincing 62- 40 victory against the Bulldogs. Congrats to Byars who was named Player of the Year in girls' basketball by 10th Region Basketball Media. (Photo by Matt Cizek)

Between playing their last regular season home game, paying an emotion-filled tribute to cancer victims, and being newly polled as the #1 Girls Basketball team in the state of Kentucky, there was plenty that could’ve distracted George Rogers Clark (25-1) on Tuesday night in their game against Paul Laurence Dunbar (8-15).

“I was worried about the start with all of the stuff that was going on,” Coach Robbie Graham said.

The Lady Cards quickly put some of those worries to bed.

Led offensively by Brianna Byars’ 21 points, they jumped out to a 10-0 lead en route to a convincing 62- 40 victory against the Bulldogs.

“We were getting within our offense. When we get within our offense, we shoot with a lot more confidence,” Graham said.
Along with Brianna Byars’ 21 points, freshman Ciara Byars – who was recently named the player of the year by 10th Region Basketball Media – scored 16 points.

The game was the last to be played in Winchester for seniors Amber Miller, Asja Garrard, and Tyra Flowers.

“My favorite [memory] is beating Campbell [County] because nobody expected us to beat them,”

Defensively, the Lady Cards created havoc for the Bulldogs by forcing 18 turnovers. Pressure that led to steals and hurried mistakes contributed to their defensive strength.
“[We] got our hands on deflections and got a lot of balls by jumping into passing lanes,” Graham said. “Rotations have to be strong and quick, and that’s how we’re able to get steals from our defense.”

Offensively, the team was able to hit eight different three-point shots on the night. Among them, Asja Garrard hit a pair to make up her eight points – all in a strong fourth quarter – while Trinity Gay netted three of her own.
“This is one of our better nights [shooting three-pointers] in a while,” Graham said. “The ball movement
was very important offensively.”

The Lady Cards finished with a 20-point outbreak in the 4th quarter following a 42-24 lead at the end of the third period. After scoring 18 points in the opening quarter, they were limited to 24 over the second and third.

“We kind’ve hit a lull,” Graham said. “I think we’re trying to make a play that’s not there instead of taking what the defense is giving us, but it’s good momentum to be winning, of course.”

The night was unique for one additional reason.

In a pregame ceremony, each player paid tribute to an individual they know who’d been affected by cancer in some way shape or form, similar to the Stand Up to Cancer campaign. It’s a subject that hits close to home for Coach Graham.

“Cancer’s very emotional. My family and I have been through a lot, and the girls know how emotional
I’ve been through it,” he said. “We thought it was very important to bring awareness to that.”

The newly-ranked #1 Lady Cards get an early playoff test Thursday night against the Notre Dame Pandas.

“People are going to be gunning for us, we know that,” Graham said. “Like we always say, we’d rather have a team that has a shot to win, as opposed to a team that doesn’t have a shot at all.”

Afterward, they’ll begin the 40th District Tournament with a 6pm matchup against Bourbon County (5-22) at Montgomery County High School. The winner advances to face either Montgomery County (18- 10) or Paris (16-10) in the final on Wed. Feb. 23 at 7pm.