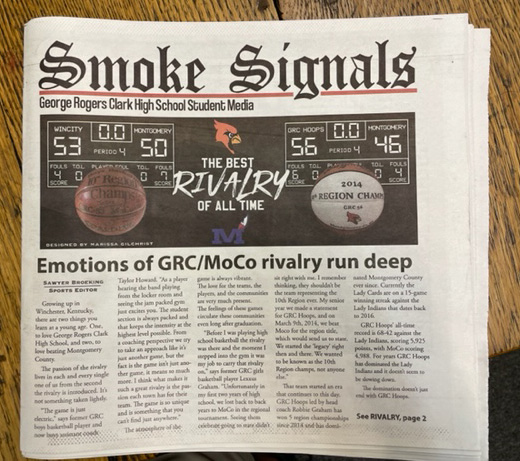 Other day, be sure to say “other day” in a deep voice like that of Wayne from Letterkenny (great show on Hulu), I came across a video produced by GRC’s student newspaper Smoke Signals’ video staff. Here is the link: https://grcsmokesignals.net/10195/sports/grc-hoops-2022/

Video features clips from the GRC girls’ basketball shown against the upbeat song by Fitz and Tantrums’ “I can make your hands clap.” Amazing video!

I am a product of the MTV generation, well… back when they played music videos non-stop. I love music videos. I’ve won a state press award for my videography once, but I got to say that nothing I did compares to the videography I saw in that video produced by Smoke Signals.

Thus, I have dispatched my trusted aide de camp, my daughter Samantha, a GRC sophomore, to sign up for GRC journalism teacher Shanda Crosby’s class. A JROTC cadet, Samantha seeks to join the long grey line at the US Military Academy at West Point, praying that she gets admitted. Thus by taking Crosby’s journalism class, she’ll learn how to write succinct to-the-point reports for her commanding officer.

Side benefit — Samantha can teach me the lessons she learns in videography so I can be a better journalist. Imagine if we could produce high quality videos courtesy of STV (Sun Television). A former radio disk jockey from the days of vinyl (Google WKRP DJ Dr. Johnny Fever), imagine the music catalogue in my head that can give Winchester a soundtrack.

In other news, longtime Sun reader Evelyn Paynter called the other day… said Central Baptist Church of Winchester is offering a service, probably courtesy of some of the church’s parishioners who are good with numbers/tax forms, that assists folks with their tax preparation. Sun called the church to confirm — 9-2 Mondays and Tuesdays at the church.

Earlier this week, Sun published a story about Romey, who is by all accounts, the community’s dog. Romey got hit by a car, but  he is OK. When the link to the story was posted to Facebook, the post reached more than 26,000 people who shared it 26 times, leaving 31 comments with 135 likes. Post has only been up a couple of days or so — Google Analytics reports 664 clicks/pageviews — Sun’ biggest story (so far) in February. And that tally doesn’t even count the thousands of people who read the story after seeing published on the front page story.

Worth noting, Sun has a LOT of great circulation deals this month — cheaper than a cup of coffee or Krispy Kreme doughnuts from Speedway. Reach out to Sun Circulation Manager Terah Hatton at 859-759-0047 or via email at terah.hatton@bluegrassnewsmedia.com

Back to Romey — people care about dogs. On that note, Sun has begun running an Adopt A Pet page, so reach out to the Clark County Animal Shelter to bring home your very own Romey.

And has anyone noticed the cute dog sticking his note out the window from the back seat of the car driven by the school safety/traffic officer as he directs traffic flow by Campbell Junior High? We slow down just to see the dog in the mornings.

Speaking of dogs, here is a public service announcement from County Attorney William D. Elkins that informs citizens generally of Kentucky’s law regarding dogs running at large upon lands occupied by livestock.

I’ll say it, nobody wants to shoot Old Yeller, but … better that than having Cujo stalk livestock in the hills.

Mark your calendars for Winchester Kiwanis Club’s annual auction Saturday, Feb. 26 at Bargains on Broadway.
Auction will be in-person bidding only starting at 6:30 p.m. Bid on hundreds of items including portable speakers, screwdriver sets, flashlights, dog cages to bicycles; too many things to mention.  Pics of auction items will be posted on our Winchester Kiwanis Club Facebook page.
“Most of our auction items are Overstock and everything will be new,” Kiwanis President Greg Yates said.

Anyone with a news tip or gossip, please reach out to me at miles.layton@winchestersun.com or via Facebook, both the Sun or my personal account. My “avatar” or FB icon is the guy in a white dress shirt standing up in the middle of a crowd. Photo was taken in college when I was protesting something or other, probably when some anti-semitic speaker was coming to campus; paid an honorarium from student fees.