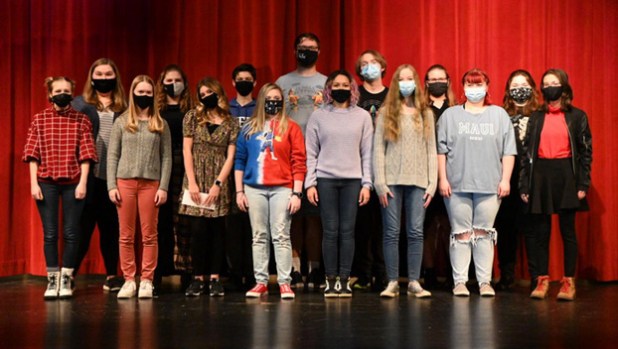 Poetry Out Loud participants created art with words, phrases and imagination. To turn a phrase, "These Cards are poets and they knows' its,'" said the Sun's bard. (Photo by Marissa Gilchrist/Smoke Signals)

She won a $100 prize and will compete at the state competition, and potentially the national competition in Washington D.C.

Fifteen students competed in the two-round competition aimed at improving memorizing and public speaking skills. All competitors, regardless of how they placed in the competition, received some sort of prize.

The first round of the competition saw all 15 students compete for a spot in what would typically become the top five. This year, due to a 1-point margin difference between the fifth and sixth placing students, the top five became the top six.

The top six went on to perform their poems again. After this, judges’ scores were tallied to determine the winner.

Poetry Out Loud is a national poetry recitation competition created by the National Endowment for the Arts and the Poetry Foundation and administered in partnership with the state arts agencies.

The Kentucky competition is set for March 1 in Frankfort.

Grace will record three total recitations for the state competition, meaning she must memorize and analyze three poems.

Recordings from all school-level winners will be judged based on criteria such as the dramatic appropriateness of the performance and the performer’s use of their physical presence.

Third through first place winners will be awarded.

English teacher and POL coordinator Eloise Lynch said she hopes the GRC competition continues to grow. “I’d love to see as diverse a group of competitors as our student population allows,” she said.

She praised the “profound courage” of all competitors.

“People are intimidated by poetry in general,” Ms. Lynch said. “Meanings in poetry are inherently complex and illusive, so at baseline, POL asks students to arrive at confident claims about pieces of literature that resist confident analysis. Then we ask students to stand behind those claims and legitimize them via solo-performance – an inherently intimidating act unto itself. It’s all nerves from beginning to end!”