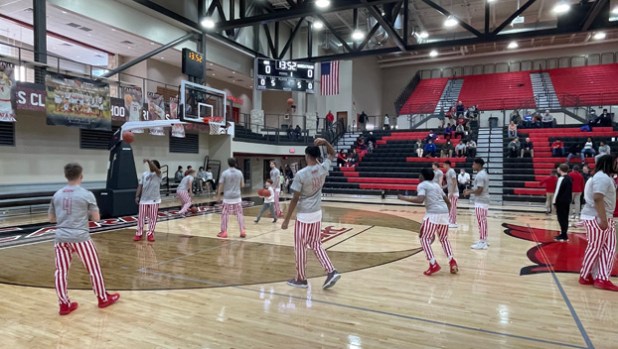 Cards extended their winning streak this week with a 94-62 victory against Bracken County and a 79-61 in against Tates Creek. (Photo by Matt Cizek)

For the fourth time in a row on Saturday, the Cards suited up to take on a team without a losing record.

And, while the first few minutes of the game held the feel that it may be a defensive battle, the rest of the game told a different story.

Led by Jerone Morton’s team-high 23 points, the state’s leading offense in points per game found its groove, and went on to a dominant 84-46 victory against Bardstown (13-11). En route, they also forced nearly a dozen turnovers.

“Our pressure on their guards led us to get more steals and create offense in transition,” senior Tanner Walton said. “It’s easier to score baskets in transition then having them guard us at half-court.”

The Cards got some offensive momentum at the end of the first quarter when Morton scored 3 of his 26 points at the buzzer for a double-digit, 20-10 lead. Not to be outdone, sophomore Reshaun Hampton (14 points, 10 rebounds) put in a basket just as the first half ended to give the Cards a 23-point advantage that only got bigger after the second half began.

“I think it gets us hyped up and going after the end of the half,” Walton said.
He would finish the game with 18 points and 6 rebounds.

The Cards, who built their record to 25-1 following the victory, were helped out on the glass as well.

Along with scoring 15 points, Trent Edwards led the way with 10 rebounds, many of which led to points for the Cards on second-chance opportunities.

“Trent and Tanner were tremendous on that part,” GRCHS Head Josh Cook said. “I thought we attacked the glass really well tonight…it was really good to see early on some guys hitting the glass [and] giving us a chance.”

Among stand out defensive plays, Sam Parrish (8 points, 7 rebounds) forced the Tigers to lose the ball with three steals in rapid succession that led to easy points.

“I think they buy into the role defensively,” Cook said. “Everybody always considers offensive roles. I think we buy into roles defensively, and that’s something we’re getting better at. It means we can put them in spots to disrupt the other team’s flow.”

Also finding the net on offense were Sammy Hernandez and Tyleik Maxwell.

Maxwell, a junior who made two of his three field goal attempts, has seen his playing time increase as the season has gone on.

“He’s only going to get better,” Cook said. “He can do multiple things, so we’re definitely a huge fan of Tyleik. He’s a very versatile player.”

With the regular season near an end, the Cards carry their #1 ranking in the state and a winning streak of over 20 games into the 40 th District Tournament.

The event itself will take place next week at Montgomery County High School. The Colts will take on Bourbon County (4-21) in the semifinal round at 6 p.m. on Tuesday, Feb. 22. The winner advances to take on either Montgomery County (11-14) or Paris (5-19).