Brooks, Wildcats not taking an enjoyable journey for granted 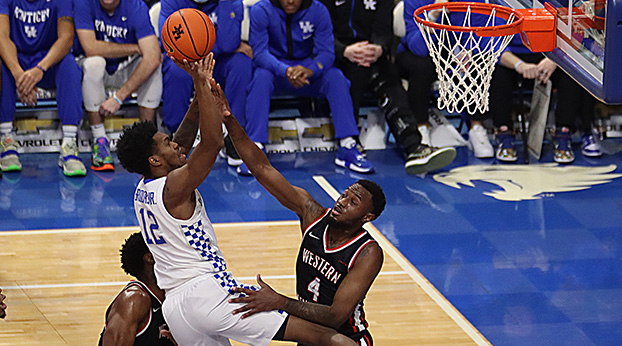 Keion Brooks said he is having fun as the Wildcats’ season winds down. - Photo by Jeff Moreland 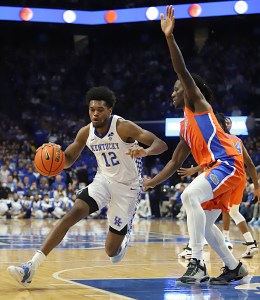 Keion Brooks is enjoying the journey.

The Kentucky forward said the Wildcats are “having fun” going into the final four games of the regular season, on and off the court.

Kentucky (22-5, 11-3 Southeastern Conference) takes on LSU Wednesday, looking to gain ground on conference leader Auburn, which holds a one-game lead over the Wildcats in the league standings. In an earlier-season meeting, LSU edged Kentucky 65-60 on Jan. 5 in Baton Rouge.

Since that time, Kentucky has lost just three games and is in a position to possibly land a No. 1 seed in the NCAA Tournament. In their last outing, the Wildcats rallied from 13 points down for the second time this season and completed a sweep of Alabama last Saturday. Kentucky was without starting guards Sahvir Wheeler and TyTy Washington, which made the win over the Crimson Tide even more gratifying.

“I think it just shows the depth and the resiliency of our team,” Brooks said. “We have a lot of guys who are prepared to step up when the time is called when their name was called. I think we did that last game.”

The Kentucky coaching staff was pleased with the successful rally, including assistant coach Orlando Antigua.

“It says that we’ve got a really good complete team, and we’ve been able to build a mentality of the next man up mentality, understanding that throughout the season you’re going to be faced with challenges, you’re going to be faced with obstacles, you going to deal with injuries,” he said. “And all it means is that you give someone else an opportunity to step up and do what the team needs for us to try to win. And you know, the Alabama game was a great example of that.”

Even though a veteran, Brooks said the Wildcats aren’t led by a solo act and instead by the team’s core of upperclassmen.

“We lead by committee,” he said. “We got the coaching staff. We got the, you know, veteran players. I’m not going to disrespect my other teammates that I put in the work and just say, now we head into the training tournament is my time to take charge and be the leader. That wouldn’t be fair to them. It wouldn’t be fair to all the work that they put in. So I’m not going to anoint myself as the leader of the team. With two months left in the season, I don’t think that’s right.”

With the regular season drawing to a close, Brooks is focused on the here and now instead of the postseason.

“I’m not really looking forward to the NCAA Tournament (right now),” he said. “We got some tough games in front of us and we all know that we understand that. You’ve got a team as dialed in and locked in as we are right now, you don’t have to worry about losing focus at all.”