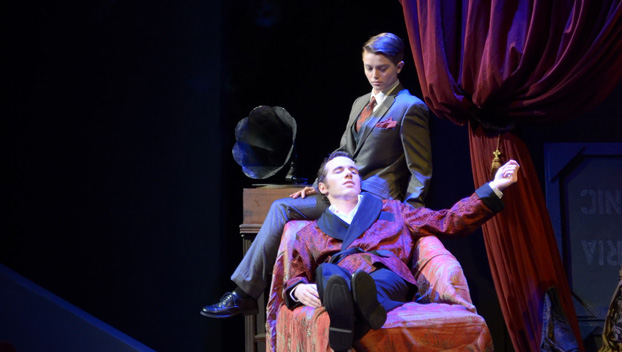 Picture from a production of 12th Night by William Shakespeare. (Photo provided by Centre College, Danville)

The Charles T. Hazelrigg Professor and director of Theatre at Centre College in Danville, Matthew Hallock, recently answered three questions for me as part of an occasional Arts Watch series which gives artists an opportunity to speak in depth.

Hallock, who has taught at Centre since 1997, is an experienced theater designer who has designed for area theaters including Cincinnati Shakespeare Co., AthensWest and Lexington Children’s Theatre.

SUN: What unique opportunities can the Centre College theatre department offer all students?

HALLOCK: I’m proud that Centre College in Danville was recognized this past year by OnStage Blog as having the best theatre program in Kentucky. Given our size everything at Centre is very personal and engaging.

Yet at the same time we have professional facilities where students are able to perform and work on productions. These facilities are the envy of much larger colleges and universities and offer fantastic opportunities for performers and theatre patrons alike.

This includes three venues housed within the expansive 85,000-square-foot Norton Center for the Arts.

The 1,500-seat Newlin Hall hosts world-class performances from full-scale Broadway productions and renowned orchestras like the Vienna Philharmonic to household names such as Dolly Parton and Yo-Yo Ma. Weisiger Theatre, a 360-seat thrust theatre, offers a more intimate setting for the three major student productions and other smaller shows each year, along with the full-scale musical students produce every four years. A Black Box Theatre is the venue for additional student plays.

Major musicals have come to the Norton Center over the years. Shakespeare is regularly performed as well. Besides offering all our students world-class performances free of charge theatre students often get to take master classes with Norton Center artists and students on the production crew gain professional backstage experience.

Thanks to Centre’s emphasis on study abroad and study away, the theatre experience extends beyond the Danville campus.

An exchange program with the Rose Bruford College of Theatre and Performance brings Centre students to south London for a full semester of study and allowed Olivia Wilkinson ’21 life-changing experiences that included time at Shakespeare’s Globe Theatre.

And a new study-away program in New York City recently allowed theatre major John Bingaman ’24 from Louisville to serve as a production intern with the off-Broadway Bedlam Theatre Company.

SUN: What opportunities can your theatre program offer students of color, LGBTQ, and to those students who identify as non-binary?

HALLOCK: As part of our production cycle we have a commitment to scripts with a focus on equity and difference. For example, both Stop Kiss and She Kills Monsters, produced during the first half of the current 2021-22 season, center on the queer experience and were written by Asian Americans and Pacific Islander (AAPI) playwrights Diana Son and Qui Nguyen.

The upcoming Farm Theater College Collaboration Project will be a collaboration with playwright Deneen Reynolds-Knotts, whose work deals with issues of race and social justice.

SUN: What opportunities can you offer students interested in playwriting?

HALLOCK: Students can take playwriting or screenwriting classes, emphasizing plot and character development, and the production of a screenplay or a one-act play.

The playwright then collaborates with several participating schools who each put on a production of the play on their campus.

Faculty and students from Centre will have the opportunity to work with the playwright in the development of the script, during the production of the play, and after each production, several students have the chance to travel to New York to perform in a public reading.

This year, Deneen Reynolds-Knott has been selected as playwright-in-residence. Her work deals with issues of race and social justice.

Arts’ Watch is written by Bill McCann, an arts columnist, playwright, member of the Dramatists Guild, and a host of the Theatre Series, an occasional feature of WEKUs Eastern Standard news magazine. For more information visit www.whmccann.com