Fairy Tales With A Twist 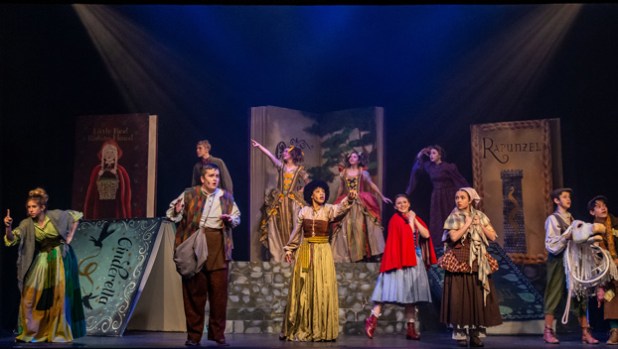 Into the Woods Jr. is an abridged version of the Tony-award-winning play by the late Stephen Sondheim. (Photo courtesy of Sally Horowitz Photography)

Into the Woods Jr. opens Friday at the Leeds Center for the Arts Friday at 7:30 p.m., and the play’s director promises a good time for the entire family

“This is a condensed version of the original Broadway musical that was written by Stephen Sondheim. It is perfect for audiences of all ages. The run time is just under 90 minutes, so it is a great family-friendly introduction to the show,” said Ellie Miller.

The original Broadway version opened in 1987 and centers on a baker and his wife, who wish to have a child, but when the couple learns that they cannot have a child because of a witch’s curse, they set off on a journey to flip their fate.

The cast also includes several favorite fairy tale characters, but these are not the classic incarnations from Disney.

“I think that Into the Woods appeals to audiences because it is all of our favorite, familiar fairy tale characters: Cinderella, Little Red Riding Hood, Jack and the Bean Stalk. But they are sort of presented with a twist, and I think that the crux of the story is be careful what you wish for,” Miller said.

Twenty-one young actors from all over central Kentucky will bring the story to life, and Miller had high praise for her actors and actresses.

“This is the most talented group of students that I have ever worked with. They are so committed to the shower and their characters, and they have created something extremely amazing and beautiful,” she said.

The cast is thrilled to show Clark County a different side of fairy tales.

Ella Cooper plays a Cinderella who is not entirely eager to find love.

“She keeps running away from her prince, unlike in the Disney version. She is very indecisive about what she wants,” Cooper said.

Playing the opposite of the traditional princess role is an excellent thing to Cooper.

“I think that the traditional princess role is unrealistic. The whole thing of ‘I met this prince, he’s the one’ from the first time meeting him after maybe speaking a couple of words. I think this princess is much more real. She doesn’t know what she wants, and I can relate to that.”

The actor behind Cinderella’s prince said that his character flips the script on the usually overly romantic archetype.

“I think that instead of being some big lovey-dovey guy here is more of comedic relief, which is a character that I love to play,” Dylan Diguette said. “He’s a little funny, and he does some silly little things here and there. He sings a whole big song about how much pain he is in because he can’t get the girl.”

“It shows how headstrong and how much of a spoiled brat Little Red Ridinghood is,” Wesley said. “She is very out there, very outspoken and she is very fearless … She gets herself into trouble a lot.”

Addy Reed plays the Witch and describes her role as different from any in the show.

“I have different parts than everyone else in the show. My music is different. I have a rap. It is very fun and very exciting,” Reed said.

However, like the rest of the characters, there is more to this witch than initially gleaned.
“She’s an evil witch, yes, but she the one thing that she really wants is someone to love. She is very compassionate,” Reed said.

Carter Johnston plays Milky White, a cow that gets separated from his best friend, Jack.

“They are only one of two people in the show that have actually have a true passion for each other. They are best friends. They get separated in the middle of the show and work super hard to get back together and connect,” Johnston said.

Playing a cow is different than playing a person. Johnston said that he was challenged as an actor because he had to learn to communicate with facial expressions better.

In addition to Friday, the production has a 7:30 p.m. performance on Saturday and a 2:30 p.m. one on Sunday. There will be additional performances from March 4-6.

Tickets are $15 for students and $18 for adults. They can be purchased online by visiting www.leedscenter.org/event/into-the-woods-jr.

Anyone attending a performance will need to present proof of vaccination against the COVID-19 virus or a negative test result at least 48 hours old. Masks are required within the theatre.