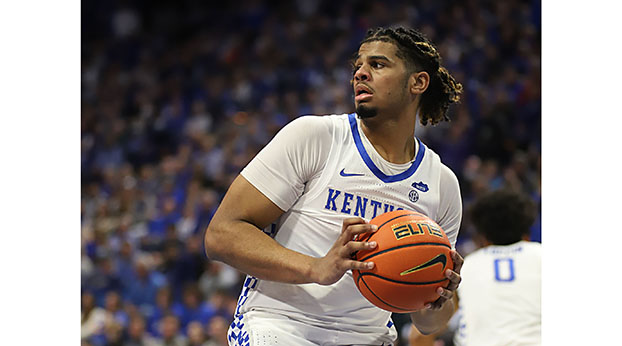 Kentucky’s Bryce Hopkins grabs a rebound for the Cats in their 71-66 comeback win over LSU Wednesday night. Hopkins scored a career-high 13 points and pulled down four rebounds. - Photo by Jeff Moreland

Bryce Hopkins waited his turn and the patience paid off as the freshman forward came through Tuesday night and gave No. 6 Kentucky a boost when the Wildcats were in dire need of a spark.

Hopkins scored a career-high 13 points — all in the second half – to lead Kentucky to a 71-66 triumph over LSU. It was Hopkins who provided a much-needed lift after the Wildcats trailed by 11 points in the first half and playing without the backcourt tandem of Sahvir Wheeler and TyTy Washington for the second straight game.

“We’re all talking about him because he did what the team needed him to do … the team was so happy for him, and so was I,” Kentucky coach John Calipari said. “…(the) whole bench was cheering for Bryce. They were so happy for him, just like they were for Damion (Collins) down at Alabama (earlier this year).”

The contest marked the second straight successful comeback for Kentucky, which rallied to defeat Alabama last Saturday. Kentucky has come from behind from 10 points or more to win three games this season. The Wildcats trailed 31-23 at halftime, which got the attention of Hopkins and he delivered.

“The coaches said we needed more energy and that’s what I tried to do when I came into the game, bring energy and contribute in any way that I could,” he said. “The coach always tells us to wait for our opportunity to come and today was mine and I just took advantage of that. … I finally broke through and it felt good.”

The Tigers defeated the Wildcats 65-60 on Jan. 4 in Baton Rouge and almost pulled off the same feat this time around, but Kentucky avoided a regular-season sweep to remain a game behind Auburn in the Southeastern Conference standings with three games remaining in the regular season.

The Wildcats (23-5, 12-3) trailed by 11 in the first half and 36-28 early in the second half before mounting a comeback, inspired by Hopkins, who had scored just 10 points in the team’s previous 14 conference games. Hopkins scored 11 points during an impressive 19-4 run that was the difference in the team’s successful comeback.

“You have to drive them because they’re switching everything,” Calipari said. “You got to make really hard cuts the first half (and) we didn’t,” he said. “I walked in at halftime, and I said we’re down four baskets. You know what, if you will start cutting and driving you will get what you want, and that’s all that we did in the second half that was different.”

Oscar Tshiebwe led the Wildcats with 17 points and 16 rebounds and carried the load in the opening half with 12 of the team’s 23 points. Overall, the Wildcats placed four players in double figures. Along with Hopkins, Davion Mintz and Kellan Grady had 13 points each.

Despite building a double-digit lead that stretched to 15 at 65-50, the Tigers roared back before the Wildcats sealed the deal by making three of four free throws in the final 14 seconds.

Playing without its backcourt tandem of Wheeler and Washington, the Wildcats struggled and committed 12 turnovers and had just three assists. However, Hopkins helped them overcome the absence of their backcourt.