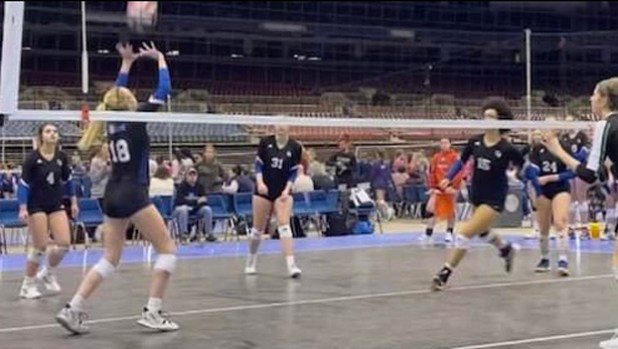 Cards competed near and far this past season -- all to set-up one goal: WIN! (Submitted photo) 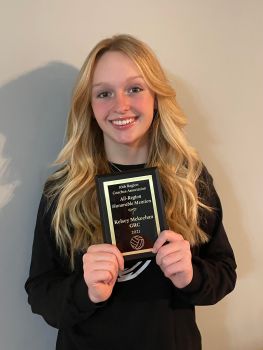 Cards’ volleyball team grew this past season to become a force to be reckoned with — skills and power that will form a foundation for success next season.

Cards finished its season 9-18 and lost in the first round of the District tournament to Bourbon County High School.

“We had a very young group of varsity players with only three seniors last year,” he said. “We look to have a strong junior class and great supporting senior class return next season,” said Kainan Hudson, who is in his first season as head volleyball coach as well as her first season with the George Rogers Clark program.

“Really this was a great all around season for such a young athlete and someone who really led our team and also helped her teammates get better and work together all year,” Hudson said. “And we look for that to continue for her for the next two years here!”

Hudson reflected on Cards’ past season.

“I am very happy with how my first season turned out here at GRC. I set one goal and that was to create a love for volleyball within our players and program and hopefully spread that to the community and we did that,” he said. “We won more games in one season this past year then this program had in the last two previous years and that alone showed our growth but the mentality, hard work and dedication we built is something I am truly proud of for this program’s growth and something that we hope to really show in the next few years.”

Hudson recalled one of the season’s highlights.

“Biggest highlight for me was the level of play and great fundamental volleyball we achieved on the varsity side,” he said. “Competing with teams like Montgomery County who finished in the Elite Eight this past season and also Henry Clay who has been a great program over the years. Just the fact that we were able to compete and win sets against these teams even though we didn’t get the overall win the level of play and the growth from the previous season to this season was something special to see and be part of and I can’t wait to watch them continue this process and get those big wins in the most competitive matches.”

But not everything can be candy and roses or rather spikes and bumps.

“Low point would be just how early our season ended,” Hudson said. “We definitely didn’t have an easy road but I truly felt we had a chance to make a run in the District and possibly the region. but our kids are resilient and will learn from this past season experience and that will definitely be something that motivates this group for the future.”

Hudson coaches two travel teams at Lexington United Volleyball club: a Midwest 14s team and regional 17s team. She said only five players were playing or were involved in travel ball before my first season at GRC.

“Currently we have 30 players between our middle and high school programs playing travel ball and that’s incredible just to see the love and passion for some to continue to play,” he said. “I know travel is not for everyone and we have plenty others who play multiple sports or activities that can make it tough, but still for those who can and want to its just great to see they are continuing to learn and grow in the sport of volleyball outside of what we offer here at GRC and get a lot of different experiences by doing so.”

The season is over but the new season will begin on July 15 and the Cards’ first match of the season and first official home match will be August 15 at GRC Arena.

“We have a great staff returning and almost every varsity player with the exception of three and a lot of great young talent coming into the high school as well as a big freshman group returning for their second year. So there is a lot of excitement and buzz surrounding our up and coming season,” Hudson said.