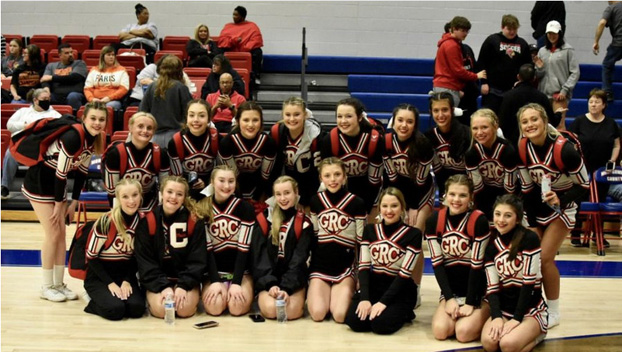 GRC Cheer tournament competition has begun through cheering on boys and girls basketball during district and regional tournaments and possibly the state ahead for the two top ranked teams in the state. (Photo by Cameron Anderson)

“Pump, pump, pump it up. Pump that Cardinal spirit up.”

The GRC Cardinal cheerleaders are gearing up for in-game competitions cheering on our boys and girls basketball during district and regional tournaments and hopefully, state.

These girls are spending hours upon hours and days upon days to make their performance the best it can possibly be.
“We have two three-hour practices where we practice floor cheers along with all of our basic sidelines and band dances,” says senior Mallory Weistroffer. “We also will be stunting and tumbling at both of those practices to see if there are any new stunts we can try during games or for tumblers.”

It can be difficult practicing non-stop preparing for in game competitions while keeping up with the consistent chants and sideline cheers for each game. Repetitive practice and dedication is a key factor in keeping this team prepared.

“We are cheering several games a week and treating them like they are competition,” says cheer coach, Jerrica Whitaker. “We practice sidelines, pre-game, and quarter cheers, stunts, and band dances to prepare.”

At the tournament games, the cheerleaders will compete in crowd leading, motion technique, overall impression, execution, and stunts/jumps with the possibility of 100 points.

“It is hard for the girls to balance being judged while cheering on their team,” says Coach Whitaker. “With competitive cheerleading, during a 2.5 minute routine all of the focus is on us. With in-game competitions we really have to be disciplined in knowing what we are doing, correct motion placements, being confident in our stunts and tumbling and then the rest comes naturally. We really respond to the crowd and the game and it helps us be successful. When the crowd is engaged it is easier for us to score high in crowd involvement.”

The judging takes place seven minutes before the game begins continuing throughout the whole game. The cheerleaders will also take place in a floor cheer between the first and second quarter.

“In-game competition is especially meaningful to me and it’s where I really get to showcase a side that’s not two and a half minute routine cheer, and honestly cheering games is my favorite component of what we do anyways,” says Weistroffer.

Cheerleading is a time of growing together and having fun. Team building for them is key during the regular season, but most of all during competitions.

“Cheerleading to me means working together as a team to build up the environment at every game,” says senior Hallee Cecil. “Doing cheers like ‘Batman and Superman,’ CC, and all our other cheers the crowds love really makes the environment special.”

These girls have been through a lot together yet chose to stick together and grow together.
“Cheering to me was my way to get out of my shell and build confidence for my senior year,” says senior Mackenzie Kegley. “I have become a better person being in cheer, and competing is my favorite thing to do. It’s so rewarding to see all the blood, sweat and tears pay off.”

Katlyn Bailey, a cheerleader since sixth grade, says the final stretch of her cheerleading career is very emotional.

“Cheerleading means a lot to me; it’s the only thing I’ve known the past seven years,” she says. “Knowing that our basketball teams have a high chance of going to Rupp Arena makes it even better. I’ve always loved the feeling of being able to compete and be involved with the school and our teams. Being a senior, it gets emotional knowing that any of the games could be our last, but I’m glad it will be with the people I care about most.”