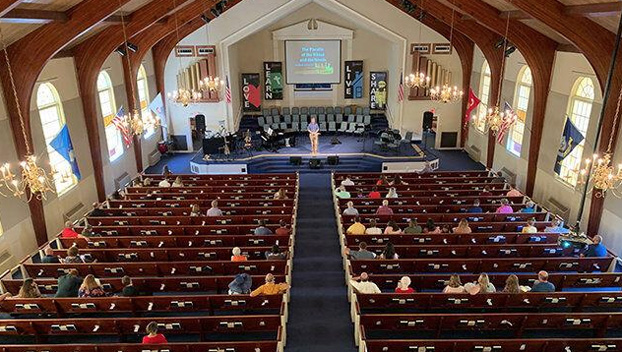 A House bill that would keep government from restricting religious services during an emergency beyond those imposed on other organizations cleared the House State Government Committee on Thursday. HB 43 advances to the full House for consideration. (Kentucky Today file photo)

FRANKFORT – The House State Government Committee on Thursday approved legislation that would keep a government entity from restricting religious services during an emergency beyond those imposed on other organizations or businesses that provide essential services.

House Bill 43 is sponsored by Rep. Shane Baker, R-Somerset, who explained his rationale for the measure to the panel.

“In 2020, during the early days of the pandemic, we faced some unprecedented situations. During that time, churches were shut down,” he said. “While churches were shut down, big box retailers, grocery stores, gas stations, and home improvement centers remained open. What this seeks to do is put churches and other religious organizations on a level playing field and make sure they are treated in the same manner as other essential organizations during a time of emergency.”

Rep. Kelly Flood, D-Lexington and a Unitarian minister, said while her church stopped in-person services and went online, “Some churches still chose to remain open, and this bill says that behavior is okay.”

Rep Jerry Miller, R-Eastwood, the committee chair, responded by saying, “In many peoples’ minds, the Holy Spirit is just as important as intoxicating spirits, and the liquor stores were all open.”

Baker agreed with Miller, saying, “The right to assemble and the right to worship should never be infringed. These are rights given to us by God, protected under the Constitution, and there were some people who overstepped that right, and we should never let that happen again.”

Rep. James Tipton, R-Taylorsville, said, “I saw people suffering from spiritual issues, because they were no longer with their brothers and sisters in churches, and we should never – there is nothing that we as a government body should ever do to – prevent someone from exercising their God-given rights to worship in the way that they choose.”

Also speaking in support of the bill was Rep. Kevin Bratcher, R-Louisville. He said, “To see state troopers taking down license plates at the direction of the governor, I think was a hateful thing to do, and it was a horrible thing to do.”

The bill now heads to the House floor.