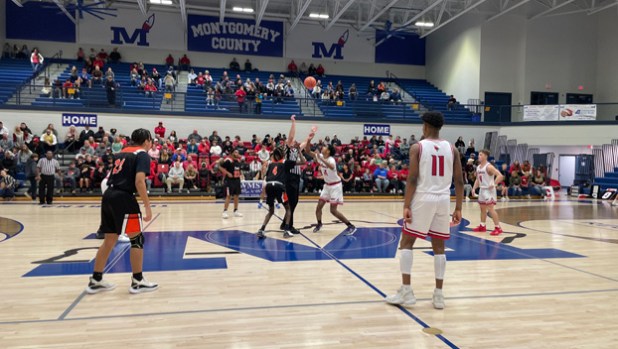 Cards came, they saw, they conquered and claimed another District Title. “We just got guys buying in. We had a couple guys making sacrifices,” GRCHS Coach Josh Cook said. “Sam Parrish was really cool. He had a great night, and he was good with me playing with some other guys, and giving them some minutes.” (Photo by Matt Cizek)

Earlier this season, the Cards left many in awe by scoring 100 points in back-to-back contests.

They saved the best thus far for their second postseason game of the year on Thursday night.

Against the Paris Greyhounds (7-20) in the 40th District Championship game, the Cards put up a whopping 114 points to win 114-52 in a game that saw them break their season-high scoring output by the start of the 4th quarter.

“We just got out in transition, shared the ball, and were very unselfish,” Jerone Morton said.

Morton finished as the leading scorer with 26 points, and was joined by Reshaun Hampton (25) and Sam Parrish (20) as one of three shooters with 20 or more. Also tallying double figures was Trent Edwards with 11 points, while Aden Slone contributed 9 and Tanner Walton added 8.

In total, 11 different players scored for the Cards.

“We just got guys buying in. We had a couple guys making sacrifices,” GRCHS Coach Josh Cook said. “Sam Parrish was really cool. He had a great night, and he was good with me playing with some other guys, and giving them some minutes.”

The Cards were able to build a big lead early on, though Paris started coming on stronger late in the first quarter. The Greyhounds – who’d gone on a 19-0 run to mount a huge comeback win over Montgomery County on Tuesday night- had cut a 20-point lead down to 15 and were on the verge of narrowing it to 13 following a steal.

However, Morton brought the crowd to its feet with a resounding block that gave the Cardinals the ball back and a score on their next possession.

From there, the defense was largely able to corral the Greyhounds, as they scored just 34 points over their final three quarters following an 18-point first period.

“Trent [Edwards] does such a great job as far as blocking intentional shots in the back line,” Cook said. “Our ball pressure and defense is really good, so that gets us going.”

As the defense tightened against the Greyhounds, the only questioned that remained was how far the offense would go. By halftime, the Cards had built a 46-point lead on an astounding 76-point first half.

With the magic number seeming to be 101, the players tried to focus on the process itself.

“We were thinking [about over 100 points], but it was more so going out there and playing hard for the rest of the 32 minutes,” Morton said. “Coach Cook emphasizes playing hard no matter how much we’re up.”

In the end, they took a 101-40 lead into the fourth quarter, and were able to add it with points from J.P Gaines, Chester Abbott, and others.

The victory represents GRC’s (30-1) fifth straight District Championship. They’ll discover on Saturday who their opponent will be in the first matchup of next week’s 10th Region Tournament.