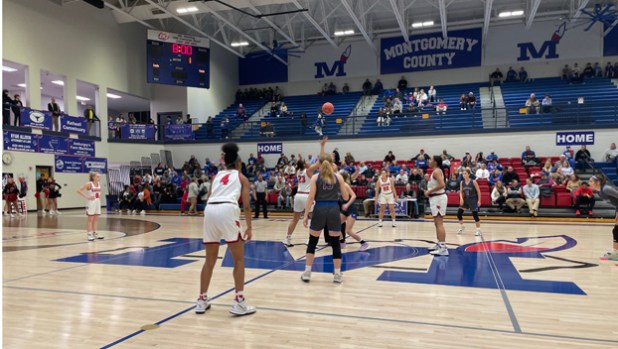 Tip off sets in motion a game that would end with a 70-53 victory for George Rogers Clark High School against Montgomery County's Lady Indians. Lady Cards' Ciara Byars scored a season-high 35 points and she was named Player of the Year by 10th Region Media. (Photo by Matt Cizek)

There’s an old saying that great players aren’t always great…they’re just great when they have to be.

In front of a raucous crowd at Montgomery County High School on Wednesday night, freshman Ciara Byars proved why she was named Player of the Year by 10th Region Media.

Scoring 26 of her season-high 35 points in the first half, Byars helped turn momentum in the Lady Cards’ favor, as they captured their ninth straight 10th District Title in a 70-53 victory over the host Montgomery County Lady Indians in Mt. Sterling.

“Through our offense, we’re going to go with the hot hand,” GRCHS Head Coach Robbie Graham said. “Ciara was open…if it ain’t broke, don’t try to fix it.”

The Lady Indians, coming in with the 2nd-best record in the Region at 19-11, gave the Lady Cards all they could handle early on. Led by 10 first half points from senior Savannah Parker and 7 from freshman Hayden Barrier, they were able to build a 6-pt. first-half lead as the Lady Cards looked to find their footing offensively.

Halfway through the second quarter, the Lady Cards were able to find their groove – as Tyra Flowers scored to become the first player other than Ciara or sister Brianna Byars to find the scoreboard.

“When our team was struggling [offensively] and I noticed that I started to get it going, I decided to get us going,” Byars said. “Once I started, Tyra Flowers came in, and we just all started to get into GRC basketball.”

Flowers would finish the night as the second-leading scorer with 16 points, while Brianna Byars tallied 12, and Kennedy Stamper along with Trinity Gay also found the net.

With the Lady Cards clinging to a 4-point lead just before half, a momentum turner came that favored GRC.

Attempting a three-pointer with only seconds remaining, Byars was fouled behind the three-point line and – after three made free throws – gave the Lady Cards a 7 point lead heading into the locker room. It was their biggest lead of the game to that point following a well-played first half by Montgomery County.

“We were going to go into the half with a lead anyway, but I think that gave us a lift,” Graham said.

However big the offensive lift was, a strong defensive start to the second half helped turn momentum permanently in the Lady Cards’ favor.

GRC forced turnovers on four of Montgomery County’s first five possessions, and scored on their initial two to build an 11-point lead. They would outscore the Lady Indians 22-8 and enter the 4th quarter with a comfortable 21-point lead.

“We came out in the third quarter, and got some stops. That was huge,” Graham said. “I think that was the biggest point of the game.”

With the win, the Lady Cards move on to the Region Tournament, with drawings to be announced this weekend.

“We want to be number 1 seed in the regular season, win the district, win the region, and we want to go to Rupp [Arena] and have a chance,” Graham said. “Two of our goals are behind us, so we’ve got two more to go.”