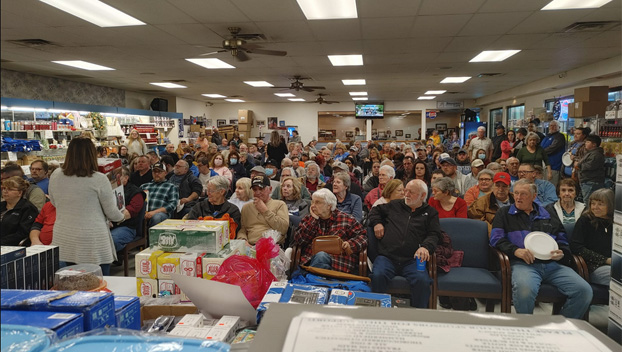 Going once, going twice — sold for a good cause!

Saturday’s Winchester Kiwanis’ auction was a big success at Bargains on Broadway. A standing room only crowd of more than 150 people attended the annual fundraiser that began in the 1950s, maybe sooner, from out of the back of a pickup truck in the Kroger Parking lot at the corner of Maple and Broadway — or — it started on the back of a flatbed truck in front of the courthouse.

“Our Kiwanis auction was a huge success!” said Winchester Kiwanis President Greg Yates. “Way beyond my expectations. The place was packed, standing room only.”

One hundred percent of auction’s proceeds go to the Kiwanis annual “Walk with a Child” event that the club has at Walmart in September. The proceeds help provide school children near and far with backpacks and clothing.

Grand totals are still being calculated, Yates said, but preliminary figures indicate that at least $10,195 of merchandise was sold — a figure that is sure to grow as contributions from the auction’s sponsors are counted.

Folks bid on hundreds of items including tool sets, flashlights, golf kits, toys and bicycles. A bidding war over a tasty chocolate cake erupted between buyers who could not say no to a slice of heaven.

“The bid war I remember was for the German Chocolate cake made by Carolyn Burtner,” Yates said. “Normally her cakes go for $70-80, but Saturday night her cake sold for $140.”