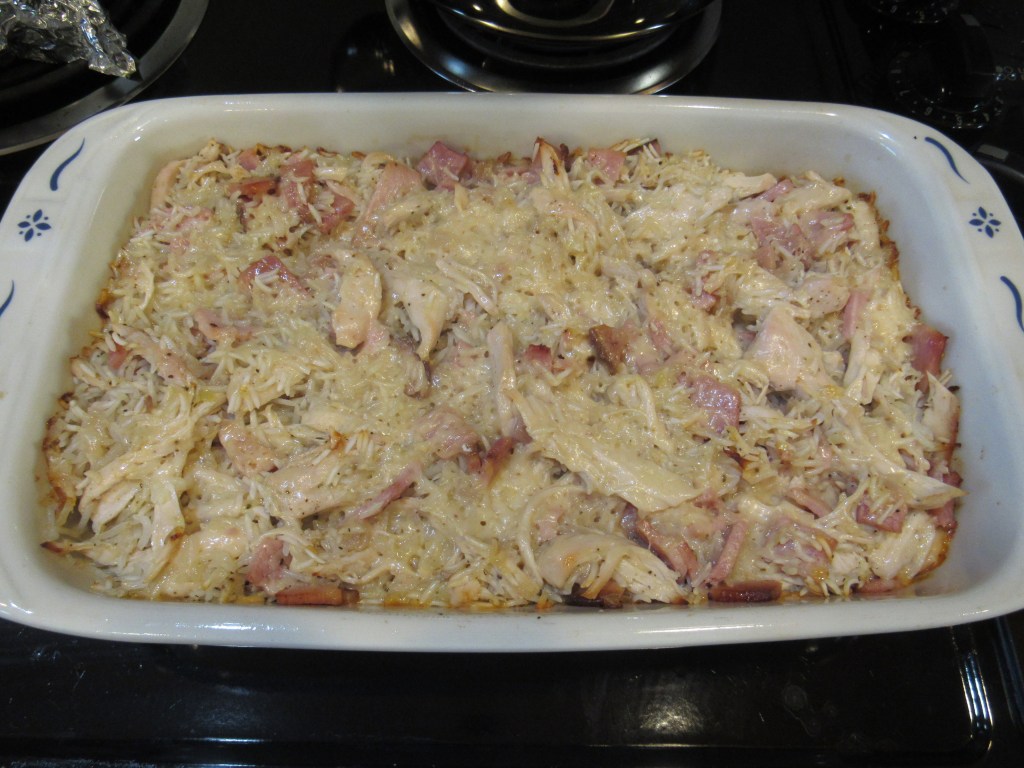 Pour mixture into prepared baking dish. Sprinkle with cheese. Cover and bake for 45 minutes or until rice is tender.

Today’s recipe came from the March/April 2011 issue of Cooking with Paula Deen magazine and when I spotted it in my stack of chicken recipes to prepare someday, I decided it was time to give it a try. Even though I’m not a fan of cheese, I don’t mind a little Parmesan.

After thawing some chicken breast, I seasoned them with a little salt and pepper and put them in the oven to bake for about 20 minutes. I removed the chicken from the oven and let it cool a bit before shredding it with a couple of forks and then setting it aside while I greased a 11 x 7-inch baking dish.

Next I chopped up an onion and minced the garlic, melted the butter in a large saucepan, and then tossed in the onion and garlic. While that cooked, I diced up some honey glazed ham we had in the refrigerator.

When the onions were tender, I poured in the chicken (I used 3 cups of shredded chicken because Brad and I like lots of meat in a casserole) and the ham. After a couple of minutes, I added the rice and stirred for about a minute while the mixture cooked. It was time to pour in the liquid ingredients and the salt and pepper.

After a couple of minutes, I put the mixture into the greased baking dish, sprinkled on the grated Parmesan and slid the dish into the oven.

The oven timer sounded after 45 minutes but the rice wasn’t tender (I knew this because I took a tiny taste) and I continued cooking the dish for 10 more minutes.
The table was set and I let Brad know supper was ready. We sat down at the table, joined hands and Brad said a prayer thanking God for the food and His watch care over us.

We each scooped a good helping of the casserole onto our plates – we were hungry and started eating. After a couple of bites Brad said he thought there was some kind of odd spice in the dish that he wasn’t crazy about. I told him the only spices were salt and pepper.

After a few minutes I mentioned that the ham I used was the little ham he’d cooked the day before then he said “that’s it, I glazed the ham with honey and I’m not crazy about that flavor in this dish.” The honey glazed ham didn’t bother me but I thought the casserole had a bit too much pepper and that there was too much rice because it was a bit dry.

Brad said he didn’t want this dish again if I used honey glazed ham in it, but he thought country ham or just plain ham would be good. Neither of us thought there too much chicken in the dish.

Together we decided this dish falls into the Nailed It category. I’ll be making it again but with a different kind of ham and a little less rice.
There was plenty of this casserole leftover for another meal and when I reheated it I added about 1/4 cup of chicken broth and sprinkled more Parmesan cheese on top. Brad and I both thought that helped the dish.

If you decide to give this recipe a try, I think you can make adjustments to the salt, pepper, and/or cheese and it will be fine.
Oh, and I’d use a little less.