‘Kentucky Is With You Every Step Of The Way’ 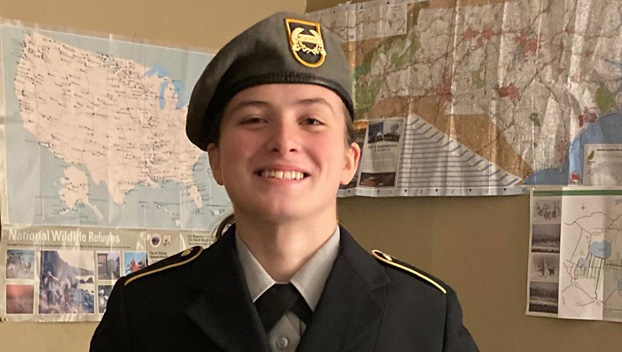 George Rogers Clark JROTC cadets like Samantha Layton wrote letters of appreciation and assembled care packages for a Kentucky Army National Guard Unit. The unit is currently deployed on a peacekeeping mission in the African nation of Djibouti. (Photo by Nicole Bowman-Layton)

My name is Samantha Layton and like you, I’ve been thrown into an unfamiliar horizon not unlike yourself but on a much smaller scale.

Earlier in January I received a deployment of my own in moving to Kentucky from Mississippi. Half of my family still lives in Mississippi. I know it’s small in scale compared to being on the other side of the globe, but being apart is hard as you know all too well.

However, I’ve learned to take life day by day and to cherish the small things.

Though my research about Djibouti is dull in comparison, I hear the beaches are nice. Still, I’m sure that nothing there can compare to the mountains and rivers of Kentucky. You get to experience the culture of Djibouti, with all its treasures and flaws. Southern hospitality is matched by none.

Thank you for your service in spite of your hardships! You are supporting democracy! You are a shining beacon of hope in the darkness! You are helping the impoverished people of Djibouti.

Since the beginning of time, military service has evolved from the days of Sparta to the present, but it has always been about service and sacrifice.

While students like me are writing essays on the subject, you are living it! It takes courage to jump into the unknown, not knowing which way is up; but serving the one goal on your mind remains the same – protect/defend our country.

When in enemy territory, you find comradery in people from the states that you would never meet otherwise. A sense of duty behind military service is as wide as the ocean.

As World War II General George Patton said, “Live for something rather than die for nothing.” You feel a sense of pride when defending the Stars and Stripes, while putting yourself in harm’s way while defending our nation, asking for little in return.

After leaving Kentucky, you’ve spread your wings and expanded your horizon with your military service. In your travels, you’ve also directly and indirectly lifted others in your wake. You are a pillar for the people around you.

I know it’s hard being up there in the contrasting background of Djibouti, where danger and disaster lurks around every corner, but stay strong.
Kentucky is with you every step of the way. I thank you as a newly native Kentuckian.

“Accept the challenges so that you can feel the exhilaration of victory.” – George S. Patton