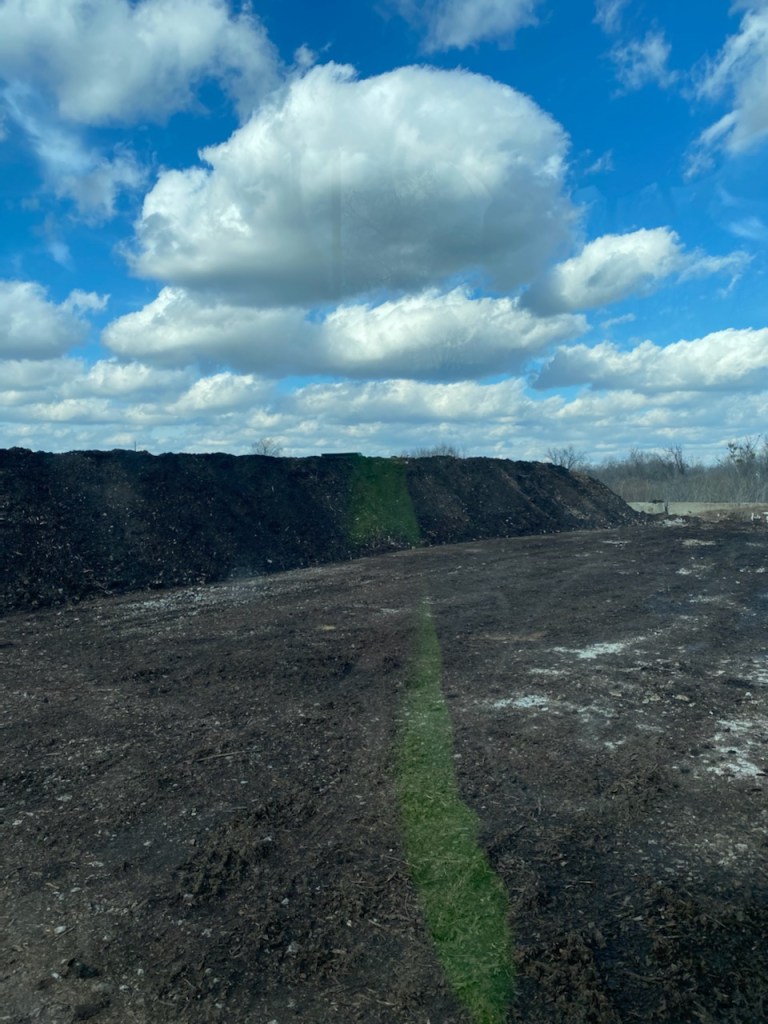 Spring and gardening season are–hopefully-around the corner after a topsy turvy winter, and for anyone looking to find the right fuel for maximum flower power, the Clark County Road and Solid Waste Department offers an eco-friendly alternative to industrial fertilizer.
Since April 2021, it has produced compost made from the remains of deceased animals removed from local farms at its two-acre composting facility located near the county animal shelter and fairgrounds.
“We’ve done about 850 head,” the county’s solid waste coordinator and compost officer, Allan Curtis, said. “We’ve got the process down to a pretty good art form.”
In 60-70 days, the department can break down 98 percent of the animal into what Curtis called “a dark soil amendment.”
Solid waste department employee Matthew Sparks explained the process in detail.
“We have a mix, it’s manure and wood chips, and we create a minimum of a one-foot base layer. We put the animals inside of the base, and then we will cover it with an additional foot or two,” he said. “The natural biology of it, you are getting all the energy from the animal, which is creating heat and the heat from the chips and manure. A lot of microorganisms and bugs, and fungus are starting to work to break down the actual organic matter.”
The department has the compost tested to ensure that it is environmentally safe and full of nutrients.
So far, the compost has performed well.
“We’ve tested it on some farms and have gotten really good results for hay production,” Curtis said.
Anyone wishing to purchase compost or have an animal removed from the property can call the department at (859) 745-0255 to arrange a delivery or pickup.
Curtis said that the solid waste department tries to and usually does same-day carcass pickup.
“We are very efficient, and we are very respectful of people’s property. We try to do the most efficient, cleanest service we can,” he said.
The Clark County Fiscal Court used to contract dead animal removal services out to a private company.
“The county used to use a contractor, and we paid on average about $35,000 a year for dead animal removal, which is farm animals: deer, horse, sheep, and things like that you would find on typical acreage around Clark County,” Curtis said.
In 2019, the company the court contracted with was purchased by a larger entity charged around triple the usual rate.
“After running some numbers, the county looked like it was going to go from $35,000 a year to well over $100,000 a year,” Curtis said.
In an effort to save money, Judge-Executive Chris Pace asked Curtis to look into alternative removal methods.
For over a year, Curtis researched and visited composting facilities around Kentucky.
Once Curtis was confident that the county could construct a facility that would process the remains cheaply and efficiently, he applied for several grants and got his compost license.
The facility opened its doors a year and a half later.
“It’s a large gravel parking lot with concrete, Jersey walls around it,” Curtis said about the facility. “We just recently constructed a building to house equipment and things like that.”
Curtis said he thinks that the project has been worthwhile because it saves taxpayers money every year and created two jobs.
“We are taking care of two Clark County families,” he said.
And it is also easy for Clark County families to take care of the county by making their own compost.
Sparks said that the best thing to do is to first build a bin out of wood or dig a hold in the ground and then fill it with hay. There are many options to help break down the solid waste material.
“You can use primarily wood chips, straw, hay, or any leftover scraps,” he said. “Instead of throwing that in the trash, you can take your scrape food, make a bin, put hay down in there, put all your scrap food on top of that and cover it.”
Sparks said that composting is easy to do and is an excellent way to make the area “cleaner and greener.”