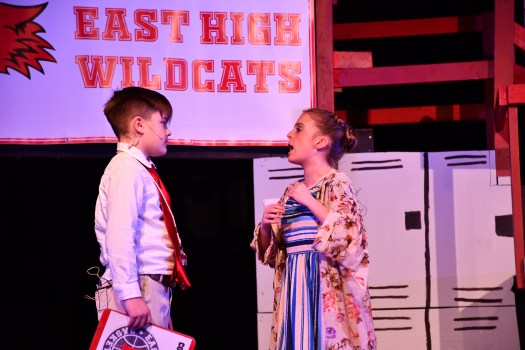 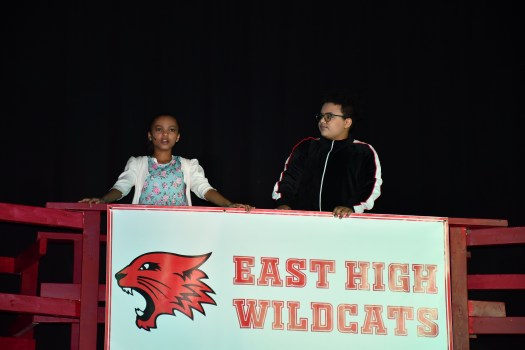 Baker Intermediate School’s “High School Musical Jr.” will be performed at 7 p.m. on Saturday and 2 p.m. on Sunday. Tickets are $10 for adults and $5 for students. They can be purchased with cash or a check at the door.

Much like the production’s signature song says, the cast of High School Musical Jr. is “in this together”.

The curtain went up on the musical at Campbell Junior High School Friday and is performed by the students of Baker Intermediate School.

In addition to Friday’s performance, there will be one at 7 p.m. on Saturday and 2 p.m. on Sunday.
Tickets are $10 for adults and $5 for students. They can be purchased with cash or a check at the door.

The production is an abridged version of the hit Disney Channel original movie and was geared toward middle-grade aged performers.

The story revolves around the budding romance between Troy Bolton and Gabriella Montez and their struggle to break free from the orbit of the various cliques at East High.

Avery Dore plays the female lead, Gabriella Montez, the new girl at East High who is more than her overachiever
image.

“She wants to sing but is a brainiac at the same time,” Dore said.

So how does Gabriella manage to bridge her two worlds?

“She balances them by singing and letting her heart out and not sticking to the set cliques,” Dore said.

The production’s villain, Sharpay Evans, is not cut from the typical cloth either. She is involved in East High’s drama department and loves to create drama off the stage.

“Sharpay is mostly the bad guy, and she wants everyone to stick with the status quo and be who they are supposed to be,” the actress who plays
Sharpay, Lilly Griffett, said.

Neko Holbrook said he has enjoyed singing and “having a good time with his friends during the lead-up to opening night.

Which is the complete opposite of his character, Troy Bolton. Troy is averse to letting people hear him sing to not spoil his image as the school’s athletic golden boy.

Holbrook had sage advice for Troy.

Griffet relished her role as the villain because “yelling at people” is a lot of fun.

“She’s the drama teacher, and she really loves teaching and drama.

She picks favorites and loves to give detentions,”

Schmieg said about her character.

Schmieg said she enjoyed playing an over-the-top role, complete with a British accent.

One of the show’s co-directors, Katie Berner, said that the show is “high energy.”
“We get to do a lot more pop songs. Sometimes musicals are more of the classic Broadway. So this is more pop and more dance. The kids get into the dancing part of it. I think they have fun, and that will help the audience have fun,” she said.

“This is a very hard-working group of kids, and what is really fun is that we have 57 actors … A lot of these guys are brand new to us and brand new to theatre as well,” he said.