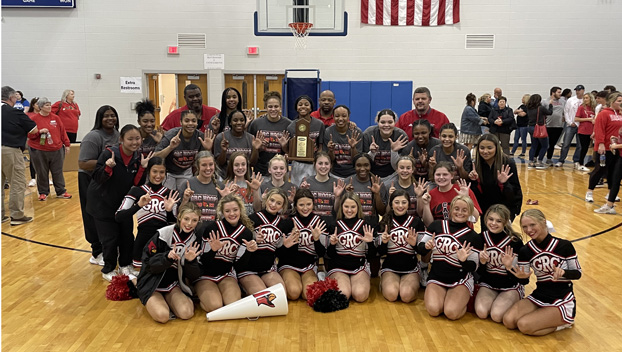 All year long, the Lady Cards have been on a mission to reclaim the title of 10th Region Champions after a difficult loss in last year’s Tournament.

On Saturday night at Nicholas County, that quest was completed.

After getting past Pendleton County and Bishop Brossart earlier in the week, GRC defeated Montgomery County 57-38 in the 10th Region Tournament Championship Game to stamp their ticket to the KHSAA Sweet 16 Tournament at Rupp Arena, where they’ll begin play against Corbin this Thursday, March 10 at 6:00 pm.

“These kids are just so resilient,” Coach Robbie Graham said. “We’ve been through some ups and downs. I just knew we had a chance.”

The Lady Cards (30-2) started the week by knocking off Pendleton County 70-33, after beginning the game on a 35-0 run that saw their defense completely shut out the LadyCats (17-15) in the first quarter.

Next, they took on Bishop Brossart (20-11), the team who’d knocked them out of the playoffs just one year prior.

With both teams playing stellar defense through the first half, the Lady Cards went into halftime with a 5-point lead.

However, after building the lead to 11 early in the third quarter, a light which seemed so bright suddenly appeared to be shadowed by a dark cloud.

Ciara Byars, who time and time again has led the team in scoring this season, hobbled to the sideline with an injury that kept her out for the rest of the game. Sensing a shift in momentum, the Lady ‘Stangs rattled off six quick points to narrow the lead back to five at 24-19.

“When she went down, I think it emotionally kind’ve hit us,” Graham stated. “I tried to get their attention and their focus right back. She’s our teammate and we care about her, but we’ve got to keep playing.”

Keep playing they did!

From there on out, the Lady Cards were able to outscore the Lady Stangs’ 21-8, including an impressive 15-6 fourth quarter run en route to their convincing 45-27 victory.

They were led by Brianna Byars’ 16 points.

“If the roles were reversed, then [Ciara] would definitely step up for me, so I’ve got to have sister’s back as much as I would any one of my team mates” Byars said.
Just 24 hours later, with the younger Byars back in the lineup, the Lady Cards prepared to take on the Montgomery County Lady Indians (21-13), who they’d defeated 70-53 in the District Final less than two weeks prior.

During a first quarter in which they outscored their opponent 18-5 – and saw three players off the bench deliver points – the Lady Cards were helped out by an unlikely yet trustworthy hero.
Junior Trinity Gay brought the home section of a jam-packed arena to its feet by finishing 3 of 3 on three-point shots for 9 points. She would finish with a team-leading 19 points in the game and added another three-pointer before the final buzzer hit.

It’s both a season high and the first time this season Gay has led the Lady Cards in scoring.

“Throughout the course of the game, I didn’t think much about shooting,” Gay said. “I just thought about being in my position, and having confidence.”

Not one to go away easily, Montgomery County rallied to bring the game closer. By midway through the third quarter, they had narrowed the Lady Cards’ 13-point lead to 3 as the score stood at 24-21.

However, just as soon as the Lady Indians seemed to be on the verge of turning the game in their favor, the Lady Cards struck once more.
In just over 3 minutes, GRC went on a 13-0 run to bring the score to 37-21. They wouldn’t look back, outscoring the Lady Indians 20-17 the rest of the way.

It’s not the first time the Lady Cards have broken through offensively in the face of adversity this season.

“It’s the want to. If you don’t want to grind it out, this isn’t the place for you. GRC is built for that,”

Brianna Byars said. “This is what we do best, we guard, we score, we just do what we do best and try to listen to Coach Graham.”
Highlighting an impressive offensive effort for the Lady Cards was a stout defense.

“We hang our hats on our defense, and I want to make sure Tyra Flowers gets her due. Barrier’s a heck of a player…and Tyra guarded her very well” Graham said. “We wanted to make [Parker] work on both ends. Parker’s a heck of a player, and one of the most improved I’ve been around in a long time.”

With the next step being the Sweet 16, the Lady Cards know that the road ahead won’t be easy.

It’s a challenge they’ve been willing to accept all season.

“When you have great kids that want to be great, it makes it easy,” Graham said. “When we practice, we practice for that goal [of winning Championships].”