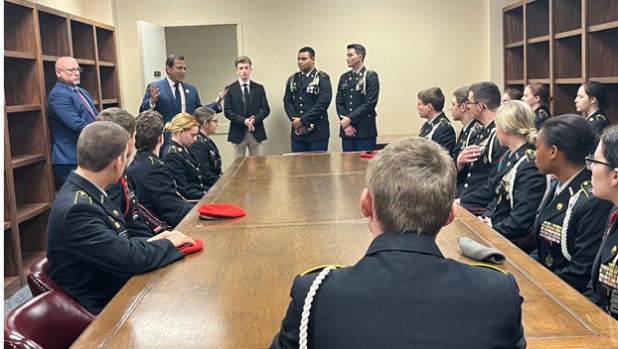 State Senator Ralph Alvarado presented a resolution with support from the state Senate to the George Rogers Clark High School’s JROTC Raiders’ teams that competed in the national championship.

“I believe all the members of this chamber know how great the JROTC programs are for our youth. They teach discipline, teamwork, citizenship and overall fitness,” Alvarado said during his speech Wednesday on the Senate floor. “But one JROTC program in the commonwealth excelled this past year, and as detailed in Senate Resolution 7, congratulations are in order for the GRC JROTC Raider teams for their performance in the National Raider Challenge Championship.”

GRC took its all-male and all-female raider teams to Molena, GA to compete against 82 other teams in four physical challenges.
“The all-male team went to the national competition merely hoping to take home a couple of trophies for specific events. Instead, they came home as champions,” Alvarado said. “They are champions for the first time in school history. The GRC’s all-female team placed fourth overall.
“These teams put in a lot of hard work with a lot of late nights. Their hard work was worth it. Not only did these teams represent the commonwealth incredibly well, but in an individual challenge for the ultimate raider championship, GRC’s own Logan Dawson brought home the title as well. Clark County is incredibly proud of these students and I feel Kentucky should share in that pride.”

One of the JROTC cadets’ instructors, retired Lt. Colonel Tom Krupp, thanked Alvarado and noted how cadets learned much from their experience in Frankfort.
“Apart from the recognition, which was just amazing for our Cadets, I think Senator Alvarado’s candor was even more impressive when answering their questions- from current legislation and general government processes, to sharing his personal life lessons.”

GRC senior Ethan Muncie of JROTC added, “It was an honor to have been invited by Senator Alvarado to come see the Capitol and the team to be presented in front of the Senate. It truly meant a lot to the team.”