10th Region Champions Roll into Sweet 16: ‘It feels good to be back, but we really have a bigger goal this time’ 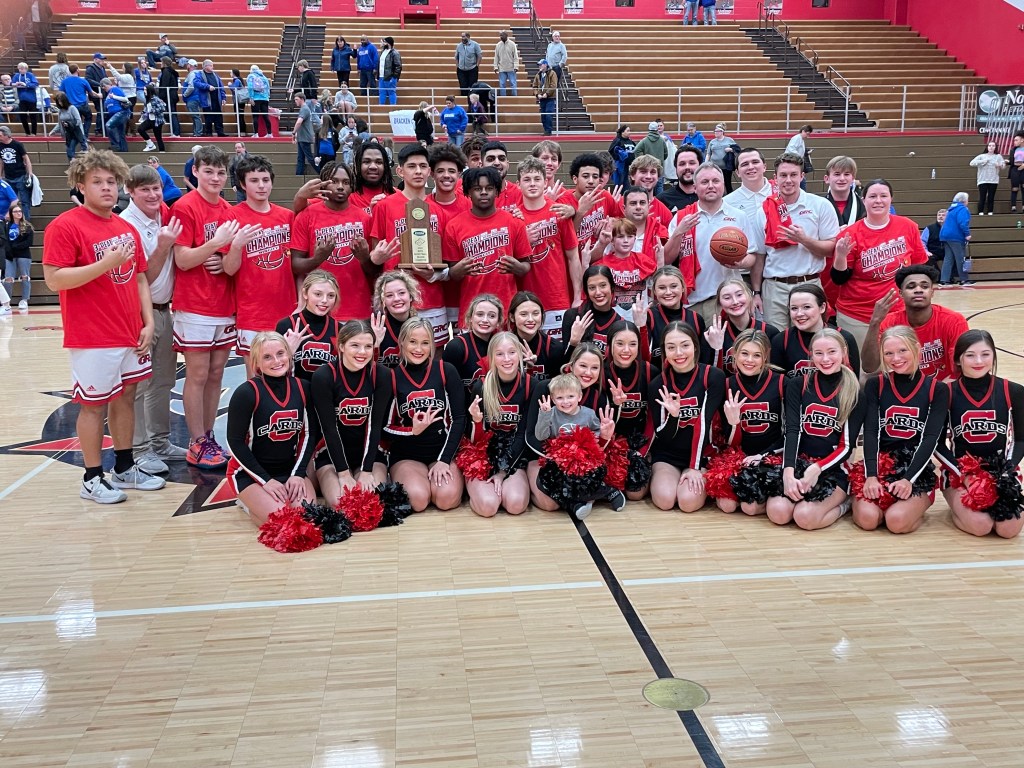 After defeating Robertson County on Wednesday of last week, the George Rogers Clark Cardinals had some time off as they prepared to win twice more in order to be declared 10th Region Champions for the third consecutive year.

On Monday and Tuesday of this week, their offense as well as the defense came ready to play. The Cards (33-1) shined on both ends as they defeated 2nd-ranked Mason County and 3rd-ranked Bracken County in the 10th Region Tournament at Holmes High School to defend their crown and stamp their ticket to the KHSAA Boys Sweet 16 Tournament at Rupp Arena once more.

“Guys play to win here. It’s not about any individual,” Coach Josh Cook said. “This team is a prime example of guys that want to put the team first, and want to win. That’s what it’s all about.”

Well known for being the #1 scoring team in Kentucky in both total points and point per game average, the Cards’ highly anticipated Semifinal matchup against Mason County (24-6), who also came into the game undefeated in 10th Region play, tested their resolve.

With the Royals focusing on a game plan that sought to limit the number of offensive possessions GRC would see, the Cards found themselves in a defensive slugfest, and held a slim 25-24 lead at halftime.

With their offense getting back on track, they outscored the Royals by 11 points in the second half for a convincing 57-45 victory.

“They were slowing the game down, because they know we like to score a lot of points,” junior guard Jerone Morton said. “We just wanted to make our possessions count and execute.”

The Cards’ strong defensive effort also contributed to the Royals having their lowest scoring output of the season.

“We had to guard, we had to show some toughness tonight,” Cook said. “We had to trust the process that we’d make a good run through our time…that was the difference in the game.”

The Polar Bears (24-10), a Cinderella team of sorts, were entering the Championship game for the first time since 1955 after winning their prior two tournament matchup in double overtime and overtime, respectively.

The Cards were able to establish an early lead, as they got out to a 13-0 run in the opening quarter.

“We knew if we jumped out in front of them it would be hard [for Bracken County] to come back,” Morton said.
Although a short rally allowed the Polar Bears to narrow the lead to seven in the 2nd quarter, they were unable to get any closer.

Coming off the bench, Tyleik Maxwell, Reshaun Hampton, and Stanley Smothers were all able to score in the first half, as the Cards took a 33-18 lead into the locker room.

“[We’ve] got guys who buy into roles,” Cook said. “That’s the key to it. We can change how we’re coaching and how we’re playing based on our situation and the lineup on the floor, and that’s what helps as long as they buy into their roles.”

After the Polar Bears scored five to narrow the lead to ten early in the third quarter, the Cards answered right back.

George Rogers Clark went on an 11-0 run to bring the lead to 21, and – in a half that was very physical for both teams – never looked back, eventually defeating Bracken County 80-45 while outscoring them 26-16 in the fourth quarter.

Once the game was over, they were welcomed back with a police escort to Winchester at around 10:30 pm to the sound of enthusiastic supporters from the local community!

Following this victory, the Cardinals will prepare to take on 14th Region Champion Perry County Central (29-4) on Wednesday, March 16th at 6:00 pm at Rupp Arena.

With the District and Region Championship win behind them, they’ll look to improve upon last year’s finish at Rupp Arena, where they made it to the Elite Eight before falling to Elizabethtown. “It feels good to be back, but we really have a bigger goal this time,” senior guard Aden Slone said. “Hopefully, we can carry that into being true.”