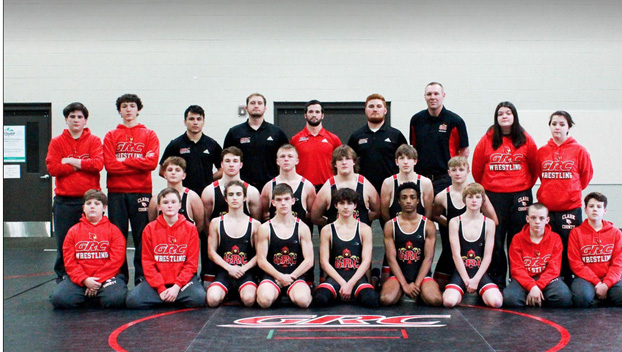 Winchester Wrestling Club captured triumph and showed promise for the future after competing at the regionals recently at Belfry Middle School.

First season on the mats, WWC captured 13th place out of 21 teams — exciting for a first-year program.

“Everyone wrestled tough and proved to a lot of people how much heart they have,” Coach Ethan Miller said. “Together this group of first year wrestlers placed 13th out of 21 teams! That’s unheard of! Everyone was so close to qualifying for the middle school state tournament but more important than that, they earned the respect of everyone they wrestled and showed true sportsmanship which makes me so proud of the men they are! The future is very bright for wrestling in Winchester and GRC Wrestling!”

Among the many highlights was how WWC’s very own Cody Gibson was one match away from qualifying for the middle school state tournament. He is a first-year wrestler who was giving up about 30lbs to each of his opponents (wrestled 240lbs but weighed in at 207).

Miller said it is a huge understatement to say that he is proud of this group of middle school wrestlers.

“This was seriously the toughest competition they’ve faced and they all stepped up and rose to the occasion. They proved to everyone that it doesn’t matter how long you’ve wrestled,” he said. “All that matters is how tough you are and how bad you want it.”