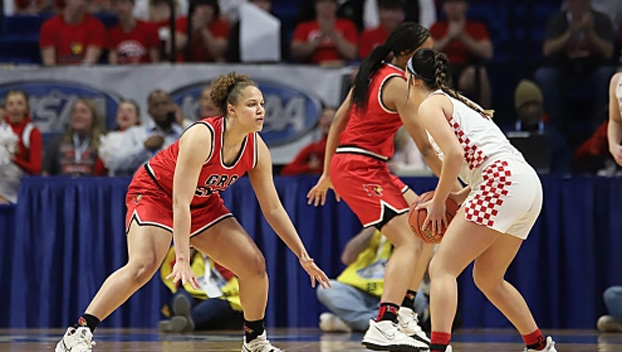 During their opening contest of the KHSAA Sweet 16 on Wednesday night, the Lady Cards looked to stand pound for pound with the Corbin Lady Redhounds.

In a defensive battle, it was GRC who reigned supreme.

The Lady Cards won a gritty defensive matchup 42-35 to advance to the Elite Eight Round.

After the initial tip-off saw Tyra Flowers score points following a foul, it looked like the game might be a see-saw battle between two keen offenses.
Before long, however, both defenses settled in and – following a 2nd quarter that saw 11 points combined from the two teams – the Lady Cards took an 18-16 lead into halftime.

Coming out of the locker room, the Lady Cards were able to open the scoring back up in their favor.

“During that stretch, we hit a couple of easy shots and were able to get some stops [defensively]”
Graham said.

Byars, who scored 21 of the team’s 42 points, played a huge role along with senior Tyra Flowers after two early foul calls against sister Brianna Byars temporarily delegated her to the bench.

“I look at it as we’re the three headed goats, and if one of the goats [isn’t] working, the other two have to step up,” freshman Ciara Byars said. “We normally do, and take care of business.”

Seventh grader Kennedy Stamper, playing at Rupp Arena for the first time, finished with an impressive double-double as she collected both 10 points and 10 rebounds in nearly 30 minutes of play.

“I knew we were up against a really tough [opponent], and I just tried to do my best and avoid the noise” Stamper said.
For their part, the Lady Redhounds – who entered the game following an overtime victory against South Laurel – rallied late to draw the game close.

After the Lady Cardinals took a 30-21 lead into the fourth quarter, six straight points by the Lady Redhounds narrowed the lead to within one basket.

However, following baskets by both Ciara Byars and sister Brianna Byars, the Lady Cards were able to build their lead to a more comfortable margin.

Solid defense included 11 forced turnovers, 5 blocks, and 5 steals, along with holding the Lady Redhounds to a 27.1 free-throw percentage.

“Defense and rebounding kept us where we were. That’s what we hang our hat on game in and game out” Graham said. “Hopefully tomorrow, we can widen that basket a little bit and put the ball in the hole.”

Tomorrow night, at 8:30 pm, the Lady Cards will continue their quest at Rupp Arena with a game against the winner of a contest between Anderson County and Sacred Heart.