US Senator Mitch McConnell: It’s Time To Get Serious About Crime 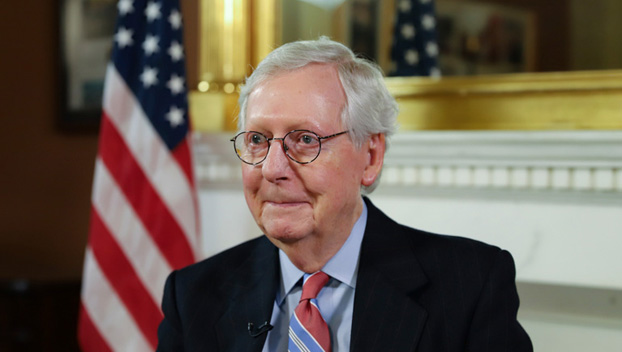 Any Kentuckian who reads the local paper or watches the local news knows violent crime is skyrocketing. The crisis is hurting innocent people across the Commonwealth, especially in vulnerable communities, and is quickly spiraling out of control.

It’s time for our leaders to get serious about this problem. Too many still promote ludicrous, soft-on-crime policies, typified by toxic calls to “defund the police.” We need to reaffirm our commitment to law and order and come together to make our streets safe again. Otherwise, Kentucky’s crime wave will only worsen.

Louisville passed a grim milestone in 2021, recording more murders than ever before. Of the 188 killed, 24 were children. A carjacking occurs in the city every 42 hours. Just recently, an anti-gun, anti-police activist tried to assassinate a Louisville mayoral candidate and was let back on the streets within 48 hours.

Lexington also recorded a homicide record in 2021. Almost 2,000 Kentuckians died from drug overdoses in the last year for which statistics are available – a 49% increase from the year prior. Dangerous fentanyl is pouring across our southern border and into Kentucky homes, accounting for 70% of overdose deaths.

Some attribute this lawlessness to the social strains created by COVID-19. But while lockdowns may have been the crime wave’s spark, the Left’s feverish attacks against Kentucky’s police officers are its noxious fuel.

As one recent study found, when anti-law enforcement sentiments become widespread and overheated, homicides and other felonies increase dramatically. Most people understand this intrinsically: when police officers come under siege, law and order will suffer.

That’s why a recent survey found 69% of Louisville residents oppose the “defund the police” movement. 66% of city residents would feel safer with more police in their neighborhoods. Big majorities of Kentuckians know that, to restore public safety, we have to back the blue.

Perhaps because of these types of polls, most Democrat officials no longer embrace the “defund the police” slogan outright. But actions speak louder than words. And Democrats’ actions continue to show a deep antipathy toward law and order.

Across the country, progressive county prosecutors are dangerously undermining our legal system by simply refusing to arrest criminals. In Baltimore, the State’s Attorney announced she would stop prosecuting many drug and prostitution cases. New York City’s District Attorney said he wouldn’t pursue charges for trespassing or resisting arrest. San Francisco’s top prosecutor won’t go after most shoplifters, forcing retailers from his city’s downtown.

These bad actors are dangerous at any level of government. Alarmingly, they’re now invading our national judicial system at President Biden’s invitation.

One of the President’s new U.S. Attorneys, Rachael Rollins, tried to erase whole categories of crimes from enforcement rolls while serving as a Massachusetts District Attorney. The Biden Administration’s federal prosecutors in Minnesota recently recommended an unusually soft sentence for a fatal arsonist, simply because his crime happened during a far-left political riot.

Another one of his new Department of Justice employees previously argued that we need to “invest less in police.”
These “defund the police” activists in sheep’s clothing now sit near the top of President Biden’s Justice Department. Their ideas and policies will make Kentucky more dangerous.

There is only one compassionate approach to combatting crime: law and order.
While we wait for our Democratic leaders to recognize this reality, I’ve worked hard to alert the Biden Administration to the urgency of Kentucky’s ongoing crime problem. I hosted the FBI Special Agent in charge of the Louisville field office in the Capitol to discuss these issues at length.

I brought President Biden’s chief drug czar to Bowling Green to meet with the sheriffs, police chiefs, and prosecutors trying to stem the tide of substance abuse.

Along with all Republicans, I will continue to back our police, support the rule of law, and oppose soft-on-crime policies. It’s time to give Kentuckians and Americans the safe streets they deserve.