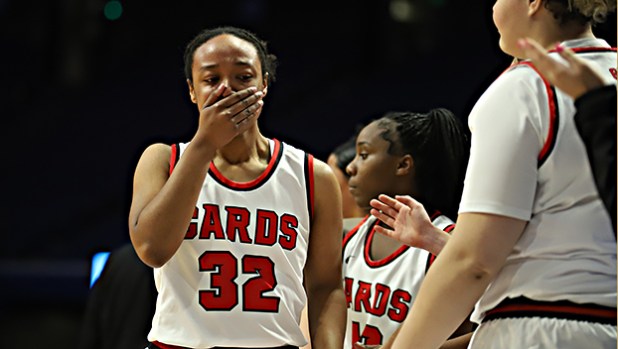 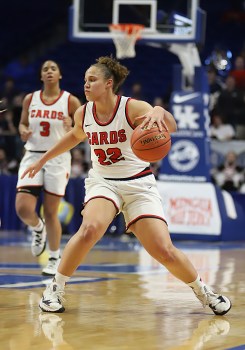 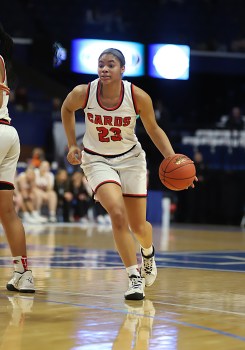 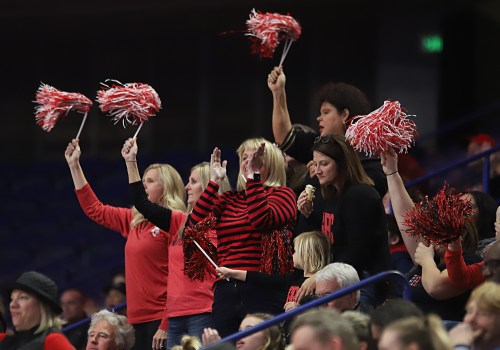 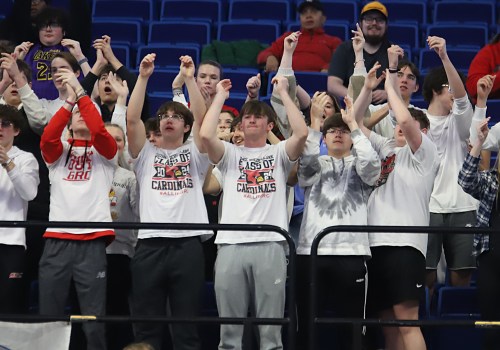 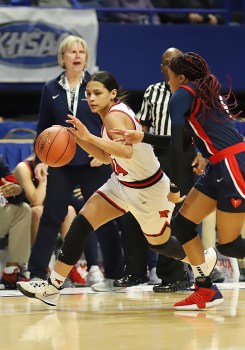 Wrestling legend Ric Flair once said that to be the man, you’ve got to beat the man.

On Friday night, the Lady Cards went toe-to-toe with the defending champion Sacred Heart Valkyries and – though they fought valiantly – came up short in a 59-40 defeat.

Their season ends with a record of 31-3, having won both the 40th District and 10th Region Championships, and getting past Corbin in the KHSAA Sweet 16 Tournament.

“I thought we came out in the first half, [and] played well,” Coach Robbie Graham said. “In the
second half, we turned it over…they scored off our turnovers, which I think was the biggest difference in
the game.”

While many teams may have been intimidated at the prospect of playing a defending state champion, the Lady Cards showed right away that they were up to the challenge.

Beginning the first half on a 5-0 run, the Cards consistently led and were able to take a slim 24-22 lead into halftime on the strength of 9 first-half points from Brianna Byars.

“To their credit, they hit three or four three-pointers right off the bat,” Sacred Heart Coach Donna Moir said. “GRC is a very good ball club. You don’t go 31-2 in the state of Kentucky and not play good teams.”

Highly touted freshman ZaKiyah Johnson of Sacred Heart, who’d been held to 2 points in the first half, was able to score 16 in the 2nd half while Triniti Ralston finished with 22 points.

“Our kids fought hard, played hard,” Graham said. “They’re a tremendous team. We knew that coming in. Ralston and Johnson are tough to defend.”

Statistically the Valkyries held an edge in a few other categories.

They were able to score 36 of their points in the paint compared to 16 for the Lady Cards, while points
off the fast break and second-half opportunities proved to be productive as well. They slightly edged the Lady Cards in rebounds as well by a 26 to 23 count.

It was their 27 to 7 disadvantage in points off turnovers though where they were struck hardest.

“Turnovers were just so crucial,” Graham said. “We knew that we had to take care of the ball and not give them opportunities.”

They won the 40th District Championship for the ninth consecutive year and regained the crown of 10th Region Champion.

“We’re not a moral victory team or program. We’re not pleased with just getting here…the goal was to try to cut the nets down” Coach Robbie Graham said. “With that being said, it has been a really good season for this program and these kids.”

And, while the future looks bright with the return of the likes of both Ciara and Brianna Byars, Kennedy Stamper, Trinity Gay, and others, graduating will be Asja Garrard, Amber Miller and Tyra Flowers.

“They have tremendous futures ahead of them,” Graham said. “I tell all of our seniors that the one thing I ever want you to pay me is an invitation to your college graduation. We try to make them all.”