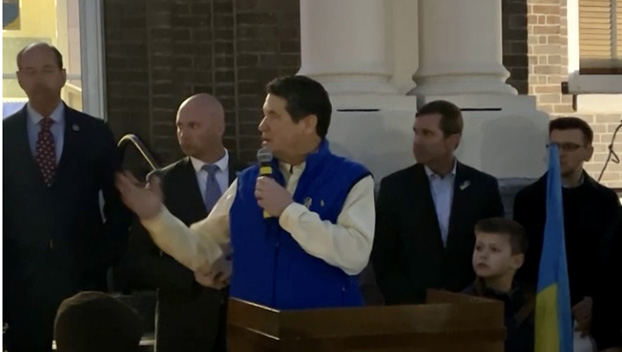 Several speakers including Jessamine County Judge Executive David West spoke to a large crowd Tuesday at a vigil in support of Ukrainian people on the front steps of the county courthouse. Ukrainian flag is by the podium. (Photo by Nicole Bowman-Layton)

Prayers for Peace, a vigil supporting the country recently attacked by Russia, included speeches, songs and prayers in an observance in which the courthouse was lit in blue in solidarity for Ukraine.

Jessamine County Judge Executive David West noted that the vigil was held to show the county’s support for its Ukrainian citizens.

“We wanted the people of Ukrainian descent that have chosen Jessamine County to be their homes to know that we value you,” he said, with several replies of “Amen” heard from the audience. “You have become our neighbors, our citizens and our friends. We want you to know that you’re important to this community. We wanted to acknowledge that you are in our thoughts and prayers and hearts, and not only you, but any family or friends you may still have in Ukraine. We lift up the Ukrainian people in our prayers.”

Those in attendance not only represented the county, but also represented the state. Among those attending the vigil was Kentucky Gov. Andy Beshear who said the state’s citizens stand in solidarity with all Ukrainian citizens.

“I look around me and I see incredible Kentuckians, those that have immigrated from the Ukraine or who have roots there,” he said. “Let’s let them know tonight that we care about them. We love them and we’re standing with them.

“I know that we here in the United States are praying for them and are willing to sacrifice in the way that we are being asked,” he said. “Now we are starting to feel the impacts of this Russian aggression. We’re starting to feel it in the price of different things, but folks, stopping a dictator has always taken sacrifice.”

He said Kentuckians are strong enough to commit to making the necessary sacrifices needed to cripple the Russian economy.
“We have a debt gratitude to pay for those courageous, incredible people in Ukraine that are standing up right now for their country and for their freedom.”

Beshear noted to those of Ukrainian descent in Kentucky and abroad that the citizens of the state stand by them.

“You are our brothers and sisters,” he said. “Just like you are worried about your brothers and sisters in Ukraine, we want you to lift, to lift you up in thoughts and in prayers and in every other way. We are willing and able to make the small sacrifices that we are being asked to make to ensure that we can stop this dictator right here right now, because we know what happens when we don’t.

“God bless you. All the Commonwealth of Kentucky stands with you,” Beshear said. “We love you.”

One participant noted that although those attending the vigil came from different countries, different cultures and have different walks of life or even different political views, they are united in by the faith in God.

As the vigil participants sang the last song, “Let There be Peace on Earth,” the courthouse was lit up in blue.

Besides the vigil, there was information on how to donate to help the Ukrainian people and packets of sunflower seeds, Ukraine’s national flower.
Central Kentucky has a large Ukrainian population, with 200 families living in Jessamine County, according to government officials. The largest wave of Ukrainian immigrants to the United States came in the early 1990s after the 1991 fall of the Soviet Union.

Jessamine County Schools have also shown support for Ukraine by putting up posters in buildings and reaching out with families.

“We reach out to families a lot, we have meetings online with parents, and we have Ukrainian interpreters present,” said Kathy Davila, West Jessamine High School teacher. “A few of us are trying to learn Ukrainian, which is a difficult language for us but we’re trying.”

The Ukrainian Pentecostal Church, in Nicholasville, has been corresponding with its contacts in the county to figure out a way to best help citizens.

It is currently accepting monetary donations. Checks may be dropped off or mailed to Ukrainian Pentecostal Church, 1101 Brannon Rd, Nicholasville KY 40356. Please put “Ukraine Relief” in your check memo.

The church will hold a bake sale and lunch from 10 a.m.-3 p.m. March 19. Proceeds will aid humanitarian efforts.