Forget A Snowman, Frosty Is A Snowplow Now 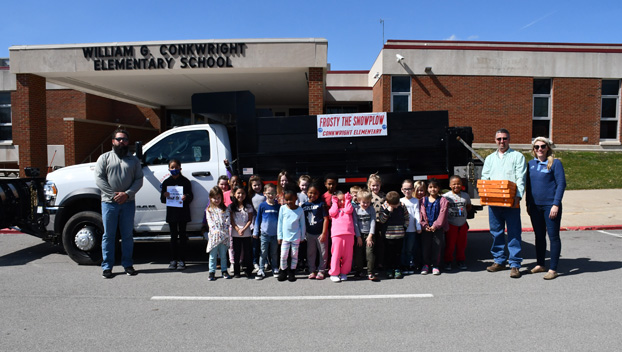 Students from Conkwright Elementary School met "Frosty the Snowplow" and enjoyed a pizza party on Friday! (Photo by Warren Taylor)

Clark County residents have definitely named a pet, many have named a child, some have named a business, but none have ever officially named a snowplow–until now.

Six plows from the Clark County Road and Solid Waste Department were recently named in a contest involving local schools.It all started with a random conversation in the early part of the year.

“A group of girlfriends and I were talking when we had all the crazy snowstorms earlier this year, and one of them said, ‘Do you know that Michigan has all these snow plow names?’” Lauren Fraser of Clark County Farm Bureau said.

She jokingly forwarded the information to Allan Curtis, the county road supervisor, and asked why Clark County did not have a fleet of named vehicles.

Curtis loved the idea, though, so the Clark County Farm Bureau and the road department decided to sponsor a contest in six local public schools to name the county’s snowplows.

“We left it up to each school to decide how they wanted to do that,” Fraser said. “Maybe they just chose the kindergarten to compete and maybe do an art contest and put a name on it. For others, it was a schoolwide thing.”

The schools reported back to Fraser that the students had a blast.

“They are really cute names,” she said.

“Polar Patroller” was the winning choice submitted by student Ariana Martinez from the Clark County Preschool.

Shearer Elementary bestowed the name “Clark the Shark” on a plow thanks to Cathy Schwendeman’s second-grade class. The winning artist was Kinley Stamper.

The winning classes received a pizza party from the farm bureau. The preschool, Conkwright and Justice classes got their reward on Friday. The Baker, Shearer and Strode Station classes will be rewarded next week.

Fraser said there is a possibility that the contest might become an annual or semi-annual event.