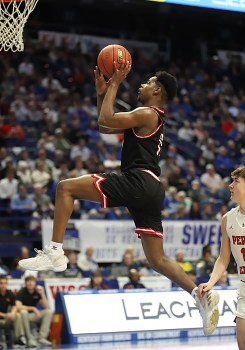 Jerone Morton drives to the basket in a first-round game of the 2022 KHSAA Sweet 16 at Rupp Arena in Lexington. - Photo by Jeff Moreland 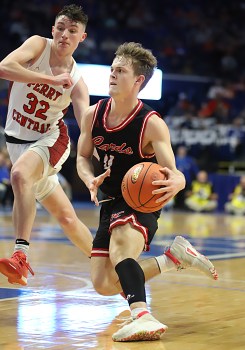 Aden Slone handles the ball in a first-round game of the 2022 KHSAA Sweet 16 at Rupp Arena in Lexington. - Photo by Jeff Moreland 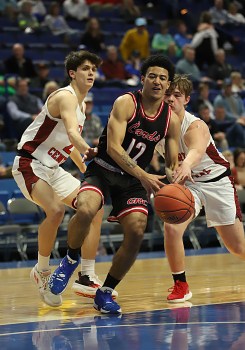 Sam Parrish drives the lane in a first-round game of the 2022 KHSAA Sweet 16 at Rupp Arena in Lexington. - Photo by Jeff Moreland

In the first quarter of Wednesday night’s KHSAA Sweet 16 contest between George Rogers Clark and Perry County Central High School, a seesaw battle ensued with the game never getting too far out of reach.

Then, as has happened often this year, the Cardinals got on a roll.

Punctuated by a three-point shot from Jerone Morton near the end of the first quarter that gave them a 4-point lead, the Cardinals took control by outscoring the Commodores 19-6 in the 2nd quarter on their way to a 41-point, 77-36 victory.

“In the 2nd and third quarter, I think our depth kind’ve paid off and our guys did a much better job defensively,” George Rogers Clark Coach Josh Cook said. “It led to transition buckets for us.”

After the Cardinals jumped out to a 5-0 lead, the Commodores came back to narrow the lead to one in the first quarter, led by five points from junior Tyler Day.

However, after a fade-away three-point shot by leading scorer Jerone Morton with just seconds remaining, the Cards were able to find their momentum.

Morton finished with a game-leading 22 points, while Sam Parrish – playing on his birthday – was just behind with 20, including a trio of three-point shots in the fourth quarter.

“It was really exciting,” Parrish said. “My teammates just find [me] when I’m open. I feel like once I’m playing hard on defense, it makes everyone want to play defense and play even harder.”

Leading the team with 10 rebounds, Tanner Walton was able to help get the ball back to the Cardinals with the score narrow early on. He finished just short of a double-double, registering 9 points of his own on the night.

The junior forward was able to electrify an energetic crowd following slam dunks on three separate occasions.
He finished the night with 13 points and 5 rebounds.

“Trent’s a difference maker,” Coach Cook said. “I honestly think he’s one of the most underrated players in the state. He’s young…the next three or four years, he can be a very special player.”

While acknowledging his team’s successful 29-4 season, Perry County Central Coach Shannon Hoskins had to give credit to the Cardinals’ strengths.
“[George Rogers Clark] got into their game…we were in trouble from that point on,” he said. “They bring it off the bench, [and] have it on the floor. They’ve got great size and great length.”