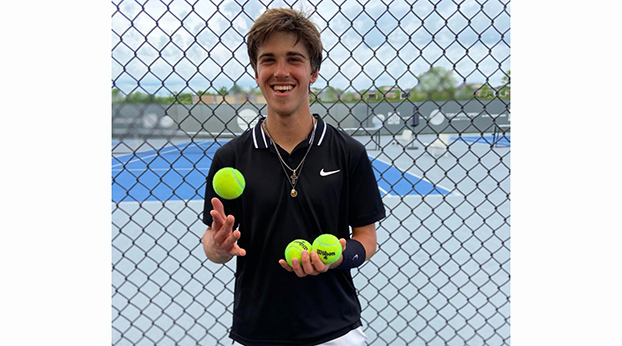 GRC’s Tennyson Prater had a strong showing at the state tournament last year and is the no. 2 seed at this year's 10th Region Tournament- Photo submitted

George Rogers Clark’s tennis team is poised to power serve aces so fast that their opponents can do nothing but sigh.

“Honestly, the whole team works well together,” said Seth Heinss, Cards’ tennis coach. “We have a lot of returning talent and the kids are working really hard. I am excited about the potential that I am seeing.”

Cards first home matches were Paris on Thursday (after press time), Tates Creek on Friday and Bourbon on Monday. In other matches so far, the boys are 2-0 this year with two clean sweeps (Cards won both 5-0) and the girls are 0-2 (both of the losses were extremely close, Cards only lost by one match, 2 matches to 3.) For those results, see the next edition of the Sun.

“The key strength of our team is our raw talent,” Heinss said. “With practice and discipline, we have the potential to do very well this season.”

Heinss shared the team’s goal for the season — “smart tennis.”

“My goal for this season is for all of my players to develop a love of the game and play ‘smart’ tennis,” he said. “I told my players at the beginning of the season that winning and losing are not most important to me. I want to challenge them mentally to learn new strategies and make wise decisions on the court.”