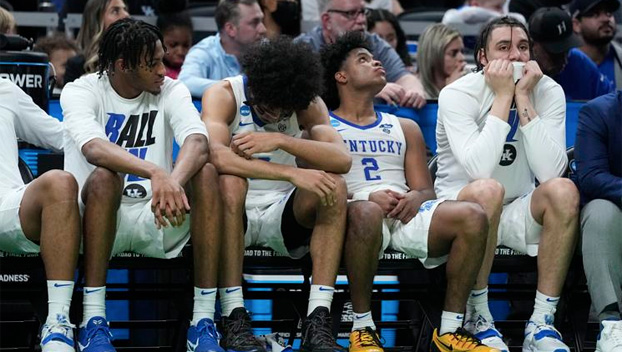 Kentucky players react on the bench at the end of the college basketball game against St. Peter's in the first round of the NCAA Tournament, Thursday, in Indianapolis. St. Peter's won 85-79 in overtime. (Photo from Kentucky Today)

INDIANAPOLIS — Saint Peter’s left the floor dancing after handing Kentucky a shocking first-round loss in the NCAA Tournament on Thursday.

The Peacocks (20-11) needed overtime to dispose of the Wildcats, 85-79, in a stunning outcome. Saint Peter’s made six straight free throws in the final 31 seconds to hand Kentucky its first opening round defeat in John Calipari’s tenure as coach. It also marked the team’s first early-round exit since 2009 when Marquette beat the Cats 74-66.

Kentucky, the No. 2 seed in the East Region, lost four of its last nine games, including back-to-back for the first time to close out the season. The Peacocks carry an eight-game winning streak into the second round and will face Murray State, the No. 7 seed, on Saturday at Grainbridge Fieldhouse.
The disappointing season-ending loss came on the heels of a 9-16 campaign last season – the worst in UK history and Calipari’s first non-winning season at Kentucky. Calipari restocked his roster with graduate transfers and enjoyed success despite injuries to Sahvir Wheeler and TyTy Washington that hindered the team’s progression, especially as the Wildcats were hitting their stride down the final two months of the season.

In what may have been his last game at Kentucky, National Player of the Year candidate Oscar Tshiebwe collected a double-double with 30 points and 16 rebounds. Tshiebwe was a lone bright spot for Kentucky, which struggled down the stretch. He became the first player in school history to record 30 points and 15 rebounds in a tournament game.

“It is sad because I’ve been wanting this moment for a long time,” said Tshiebwe, who wasn’t ready to announce his future plans afterward. “I’m a junior and this is three years in college and this is my first March Madness. I even told my teammates, this is not going to be easy for us. If we are not willing to fight, any team in March Madness (can win). They made it for a reason. So we’ve got to be locked in. We’ve got to be ready to go.”

They weren’t and haven’t been in sync during the past month. The 3-point shot has been missing from the arsenal.

In the past two games — losses to Tennessee in the semifinals of the Southeastern Conference Tournament and now Saint Peter’s — the Wildcats have made just six shots on 35 attempts from long range.

Calipari was disappointed his squad couldn’t keep a six-point lead in the final four minutes in regulation. Kentucky led 68-62 but had turnovers on back-to-back possessions.

“This was probably something they never felt in their lives,” Calipari said. “And that’s why I wish I had some answers with three minutes to go to help them through it to get by the first one. But I tell you what, we missed shots, and Saint Peter’s made shots. They made threes, they made layups — we missed. They made free throws — we missed. It’s one of those games that I was hoping I could get them on to the next game to get their feet underneath them, and obviously I didn’t do a very good job with it.”

Daryl Banks III provided the spark for the Peacocks, who became the 10th No. 15 seed to beat a second seed in the event since 1985.

“It was an amazing feeling,” said Banks, who finished with 27 points. “You grow up watching March Madness, the tournament, so to let that sink in — knowing the game was over — it felt really good.”

Although an underdog, Saint Peter’s coach Shaheen Holloway never doubted his squad, even in an environment that heavily favored the Wildcats.