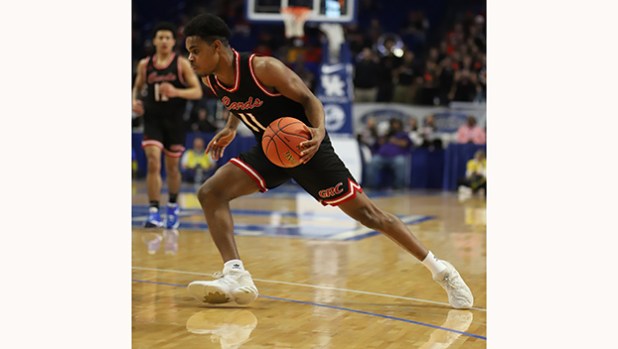 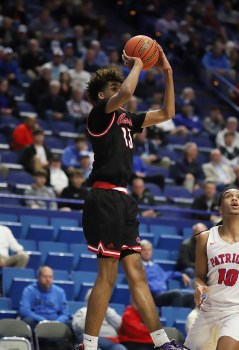 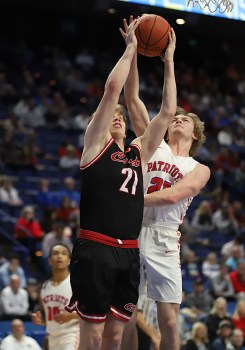 Tanner Walton puts up a shot for GRC in the 2022 KHSAA Sweet 16 state semifinals at Rupp Arena in Lexington. - Photo by Jeff Moreland 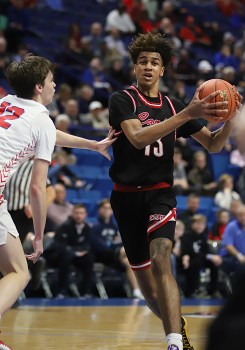 Trent Edwards goes to the basket in the 2022 KHSAA Sweet 16 state semifinals at Rupp Arena in Lexington. - Photo by Jeff Moreland

They say that just important as physical toughness is mental toughness.

In a double overtime thriller, the Cards held on to beat the Lincoln County Patriots 54-51. With the win, they head to the State Championship Game on Saturday night at 7:00 pm at Rupp Arena.

“That was a gut check game. I’m proud of our guys,” Head Coach Josh Cook said. “At the end of the day, you have to stick with your guys and keep believing. These games I think are making us more deserving.”

The Cards were able to jump out to a 13-point lead early on. However, undaunted by the deficit, the Lincoln County Patriots came roaring back – tying the game at the end of regulation, and sending the game to double overtime on a buzzer-beating two-point shot by Jaxon Smith – who finished with 14 points on the afternoon.

Once the game was sent to the double overtime, Aden Slone’s six points – four coming on free throws – helped give the Cards a 3-point lead.

Though Lincoln County had an opportunity to tie the game once more and send it to a third overtime, Smith’s three-point shot at the buzzer this time fell just short.

“Probably the most special thing about this team is that we all can go [play]” Slone said. “Today was just my turn. Next time, it can be someone completely different.”

Sam Parrish, who led the team in scoring with 16 points, hit a key shot for his final points of the game.

After Lincoln County grabbed its second lead with just over one minute and 30 seconds remaining in regulation, Parrish’s clutch three point shot from the corner helped give the Cardinals the lead back.

“It was a great pass, great find, and to have the confidence there to make that shot is just tremendous,” Cook said.

Senior Sammy Hernandez, who came in halfway through the 4 th quarter after fellow senior Tanner Walton was called for his fifth foul, played 12 minutes in the contest.

“His minutes played and IQ is just so huge for us,” Cook said. “It’s not going to show up on the stats sheet based on points. It’s going to show up based on him understanding what he’s got to do to come in and help our basketball teams at the right moments.”

With the victory, the Cards move on to play the winner of a semifinal matchup between Warren Central High School and Covington Catholic High School in the KHSAA State Championship Game. That game takes place Saturday night beginning at 7:00 pm.