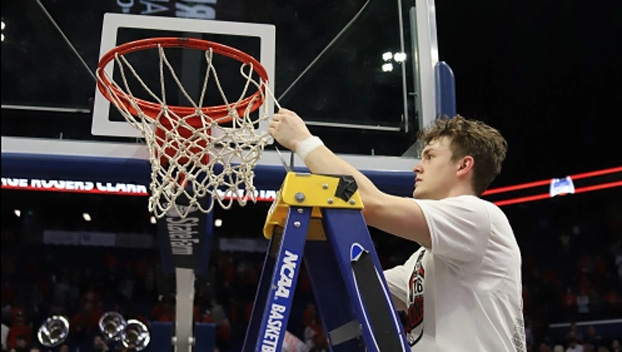 Aden Slone cuts down the nets after the 2022 KHSAA Sweet 16 state championship game at Rupp Arena in Lexington. (Photo by Jeff Moreland)

All year long, teams from across the Bluegrass State have sought to take down the George Rogers Clark Cardinals, who have reigned as #1.

All year long, they’ve come up short – sometimes by large margins, sometimes by the narrowest of defeats. Saturday night would be no exception.

The Cards (37-1) defeated the Warren Central Dragons (29-4) 43-42, winning the KHSAA State Championship for the first time since 1951, and ending the season undefeated in the state of Kentucky.

“If you’re going to have success, you better have thick skin, because there’s going to be a lot of people talking, trying to pull you away,” Head Coach Josh Cook said. “You’ve got to decide what’s most important. Is it about you? Is it about us? And these guys made a decision that it was about us. If you sacrifice, in the end, you will be rewarded, and that’s why we’re state champions.”

The Cards, whose margin of victory prior to Friday’s quarterfinal matchup stood at 32, earned each of their last three victories by a total of 8 points, with the semifinal matchup against Lincoln County going into double overtime.

Whereas much of the talk throughout this season was on their high-powered offense, leading the state in 84 points per game, the last three – including Saturday night’s final – showcased gritty defense and determination as well.

“At the end of the day, I can’t say enough about these guys. Twenty-four hours of pure toughness and playing together, and grinding out wins” Cook said. “We like to score 84 points a game, and I think we’ve been scoring half of that, but defense wins championships.”

Early in the first quarter of the contest, the Cards were able to jump out to a 6-pt. lead. They did the same early in the third quarter, building a 7-pt. lead.

However, the Dragons – who overcame second-half deficits against Louisville Male, Murray, and Covington Catholic High school to arrive in the State Championship Game – ended up going on a 12-point run to establish a 36-31 lead with just over 7 minutes remaining in the 4th quarter.

“Give credit to them,” Coach Cook said. “They’ve had to go through a tough road to get here, and they’re a heck of a basketball team.”

However, the Cards managed to keep the Dragons from scoring a field goal for over 5 minutes afterward, largely following a shift to a half-court trap defense that frustrated Warren Central’s offense.

“We’ve been holding it. We were hoping, we were waiting,” Cook said. “We talked about it earlier and thought if we could change defenses, it would give us [an advantage]. They’re basically waiting for you to make a mistake, and when you do, they get their confidence up and start playing. At the end of the day, I thought we were the first team that really had something in the back pocket to counter it.”

Offensively, the Cards started to find their groove, going on a 9-0 run of their own, including 8 straight from seniors Tanner Walton and Aden Slone to build a 40-36 lead.

“When we made a run back, it put us in the situation we needed to be.” Cook said.

After Chappel Whitney of Warren Central narrowed the lead to 2 points, a 3-point play ensued courtesy of junior Trent Edwards hitting an alley-oop shot at the rim.

“What I saw is two guys double team me, Tanner was in the middle and the guy stepped up on [him], and there’s nobody [guarding] my athletic, 6’8” big man” Slone said. “I just threw it for the sky, and I knew he was going to get it because he’s been doing it for the last two seasons.”

After the Dragons narrowed the lead to two once more in a ferocious final minute, they had an
opportunity to tie the game with two made free throws.

The second free throw was missed, and – after a scramble for the ball – it was ruled out of bounds in favor of GRC with just 1 second remaining.

The game was officially over after Jerone Morton – who led the team with 14 rebounds – ran out the clock following an inbound pass from Walton.

Morton would go on to win the Sweet 16 All-Tournament MVP Award.

“I trust my team. Everybody can do something. That’s what’s good about this team,” Morton said. “I’m just glad that my team was trusting me, and kept feeding me the ball.”

Following the win, a pep rally with the Championship trophy in place occurred at George Rogers Clark High School after the team was led back to Winchester by a police escort, with fans lining the streets along Lexington Avenue. Plenty throughout the community made sure to take advantage of photo opportunities, and Queen’s “We Are the Champions” could be heard in the background.

For the first time since 1951, a group of seniors will graduate having been crowned state champions in their last season. These include starters Tanner Walton and Aden Slone, Sammy Hernandez – who played a critical reserve role in each of his last two contests, backup forward Stanley Smothers, as well as fellow reserves Armaan Manak and Chester Abbott.

“It means everything. This is a once-in-a lifetime experience,” Walton said. “Every kid dreams to not just grow up and play on that court, but win.”

Several players – including Morton and fellow starters Sam Parrish and Trent Edwards – return next season, as do junior Tyleik Maxwell, sophomore Reshaun Hampton, and many others.