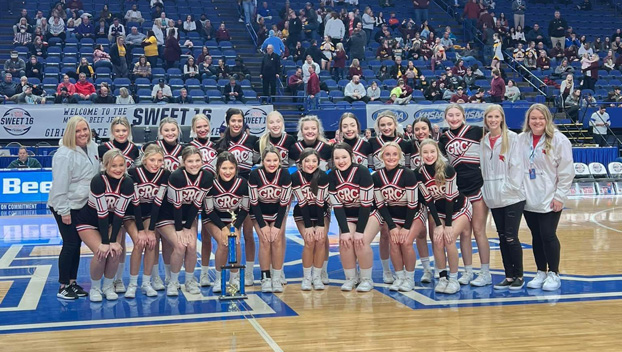 The GRC boys and girls basketball teams were not the only squads that competed at Rupp Arena the last two weeks.

The school’s cheerleading team participated in an in-game competition at both tournaments and was the runner-up at the Girls Sweet 16 two weeks ago.

“It’s definitely a great ending to their season. They love cheering on the boys and the girls, but this gave them something to look forward to and prepare for themselves,” said the team’s coach, Jerrika Whitaker.

The cheerleaders from all 16 schools that qualified for the state basketball tournament in Lexington battle it out in a rigorous competition.

“They are judged throughout the game. They are judged prior to the game during player introductions. Then at half-time, they do a minute and a half performance,” Whitaker said.

The performance combines stunts, tumbles, and a flurry of other synchronized athletic movements.

And much like their schoolmates on the hoops squads, the cheerleaders looked forward to competing on the hallowed Rupp Arena floor.

“Cheering at Rupp is a lot of their dreams. They have loved every minute of it,” Whitaker said.

This was the first time that the competition was held in two years. Corbin High School won at the Girls Sweet 16, and the squad from