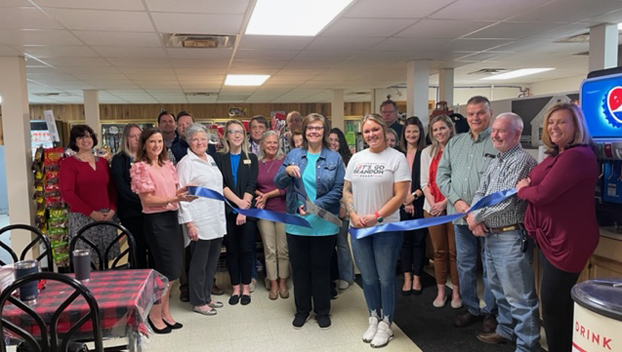 After I saw the words Chamber Breakfast, I thought I’d venture out in the country to try a sandwich from the Corner Cupboard. Beautiful drive — I think I went Route 15. Big county. Lot of small farm houses, more my style.

Anyway, I had a country ham, egg and cheese sandwich. Excellent! Homecooked meals. Good prices too.

Yeah, I’m going to go back to the Corner Cupboard with my daughter for a meal. Maybe along the way, we’ll find some random rustic 2-story home needing some TLC that we can call our own someday.

And speaking of the chamber, Sun encourages new businesses to join. It is a great way to meet people, learn more about the community and maybe try something new — a county ham sandwich on a random Wednesday morning.

News from Winchester-Clark County Parks and Recreation! Winchester is receiving a BRAND NEW playground at College Park! That undertaking comes with a big ask, however. Parks/Rec has 20 available shifts of 5 member-teams needed to help construct our playground. Folks are being contacted to help.

In other news, I lost the guy’s phone number, but I’m told some state folks have been walking around doing stuff on Boonesboro Road. Maybe some stuff is happening — bypass kind of planning. I’m told that in the past, there may have been discussions in Frankfort about the bypass — you know the one I’m talking about or just see page A4 (letter from Magistrates Elkins and Konstantopoulos). Issue may be revisited again. Time will tell.

I lived in the Outer Banks for a spell, longtime visitor too. I remember when roads were two-lane up the coast and ferries were more common. Well, eventually through patience and lobbying on behalf of our state legislators, coastal roadways and bridges became a fact of life. I think there is a big bridge opening up this week called the jug up by Rodanthe. That’s going to be something. Bridge goes out over the ocean rather than connecting glorified sandbars that are divided by marshes.

I guess what I’m trying to say is that patience proves powerful when waiting on roads and bridges.

According to notes sent by Don Rose, Joe joined the Navy in 1942 and trained at Great Lakes Training Center:
First sea duty was aboard the USS Victoria (AO 46) an oil tanker Victoria had a crew of about 125.

They served in the Pacific and were in and out of battle zones at several islands.

Oil tankers were used to refuel war ships at sea.

The Victoria was equipped to fuel eight warships at the same time.

The Victoria was never torpedoed but they had several scary situations.

They were not in direct combat but observed several combat incidents while at sea.

Joe and his shipmates were relieved to hear the news of the A bomb. They knew that it take many lives but would save many more by bring an end to the war.

Joe spent some time stationed in Japan after the war. He learned an important lesson in Japan.
“I lost my hate for the Japanese people. They had no more responsibility for the war than I did, they were courteous and kind, the war was not their fault,” he said.

Joe was discharged after the war ended in 1945. Joe let a Navy Recruiter talk him into joining the Reserve.
In 1950 he was called back to active duty during the Korean War. This time he was assigned to the Bataan Aircraft Carrier.

He saw active duty during the Korean War. They lost several planes during attempted landings because the seas were so rough during the evacuation.
Joe was discharged the second time in 1951. He had a varied and interesting civilian career.

I think Alisha James, Director of Admissions/CSR/Boonesboro Trail Senior Living told me this — Joe could’ve been the first Ronald McDonald. The Golden Arches learned of his skills as a clown so they actively recruited him, but he said no. Not sure of the details, but there is probably a good story there.