Suspect in custody after alleged shooting in Winchester 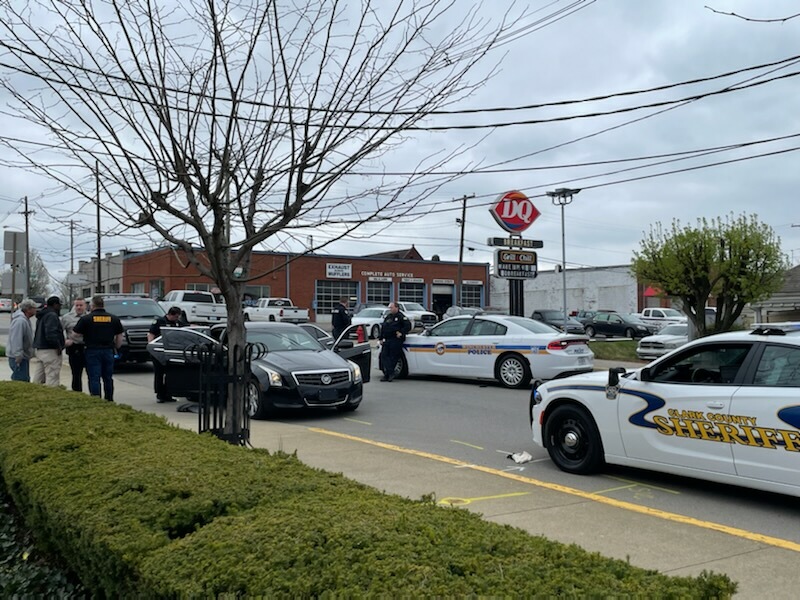 Local law enforcement was on the scene of an alleged shooting on Washington St. earlier this afternoon. - Photo by Miles Layton.

Local law enforcement arrested a suspect in an alleged shooting in Winchester Friday.

The Winchester Police Department and Clark County Sheriff responded to the 911 call earlier this afternoon.

“Today at 3:23 p.m. officers responded to a 911 call for a domestic dispute on East Washingon Street. The officers responding heard gunshots and came around the corner to see an individual that was armed or had been armed,” said Winchester Police Capt. James Hall.

The suspect, an unidentified male, got out of his vehicle and was soon apprehended by law enforcement.

Around the same time, the individuals in another vehicle allegedly on the receiving end of shots called 911 as it traveled from the eastern section of Washington St. to the western end where it intersects with Main St.

“They were on the phone with 911 until they came to a stop and we were able to get them treated,” Hall said.

All three individuals in the vehicle were taken to UK Medical Center in Lexington for gunshot-related injuries.

Hall said that law enforcement believes there was only one alleged shooter and that he is currently in custody.

Washington Street, from Main St. to Ashland Ave, was closed for several hours while law enforcement investigated the scene.