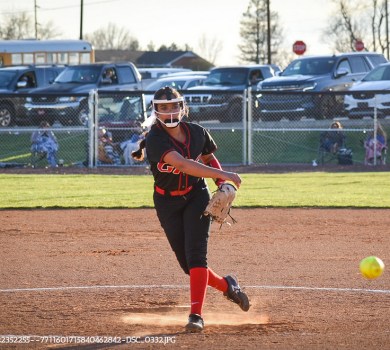 Despite seeing its six-run lead whittled down by the end, Cards still held off West Jessamine for a 7-6 victory on Monday.

Cards earned the victory despite allowing West Jessamine to score five runs in the second inning.

West Jessamine’s big inning was driven by a home run by Thompson, an error on a ball put in play by Tori Giurgevich, and a double by Marshall.

Cards fired up the offense in the first inning. Marly Rogers drove in one when Rogers singled.

Cards tallied four runs in the second inning. The offensive onslaught came from a groundout by Lilli Hill, an error on a ball put in play by Ryleigh Vanhoose, and a double by Simone Campbell.

Cards’ Ashley Martin got the win; one hit and zero runs over one inning, striking out one and walking one. Emily Schooler and Bella Guinn entered the game out of the bullpen and helped to close out the game in relief.

Schooler recorded the last 16 outs to earn the save.

Thompson took the loss for West Jessamine. The pitcher lasted four and a third innings, allowing six hits and six runs while striking out three.

Cardinals totaled eight hits in the game with Campbell, Rogers, and Gracie Clements each with multiple hits. Cards’ Campbell led with three hits in four at bats.

Simone Campbell got busy on the base-paths on Wednesday, knocking four hits in Cards’ 7-3 victory over Fleming County.

Cardinals got on the board in the second inning when an error scored one run.

Cards’ Lilli Hill was credited with the victory, who went five and a third innings, allowing three runs on two hits and striking out ten. Cards’ Emily Schooler threw one and two-thirds innings in relief out of the bullpen. Schooler recorded the last five outs to earn the save.

Char Parker took the loss for Fleming County. Parker surrendered seven runs on 12 hits over seven innings, striking out six and walking one.

Cardinals racked up 12 hits with Campbell and Addison Rodgers each with multiple hits. Campbell went 4-for-4 at the plate to lead in hits.

Ashley Martin shut down Powell County, throwing a complete game shutout and leading George Rogers Clark Varsity Cardinals to a 11-0 victory on Thursday
Cardinals opened up scoring in the first inning, when an error scored two runs.
Cardinals notched four runs in the third inning with batters Meredith Fryman, Simone Campbell, and Emily Schooler, all knocking in runs in the inning.
Martin earned the victory in the pitcher’s circle. The ace allowed five hits and zero runs over five innings, striking out three and walking one.
Dessa Foster took the loss for Powell County. The bulldog allowed seven hits and 11 runs over four innings, striking out two.
Cardinals had seven hits in the game. Schooler and Lilli Hill all managed multiple hits for George Rogers Clark Varsity Cardinals. Hill and Schooler each managed two hits to lead the Cardinals.