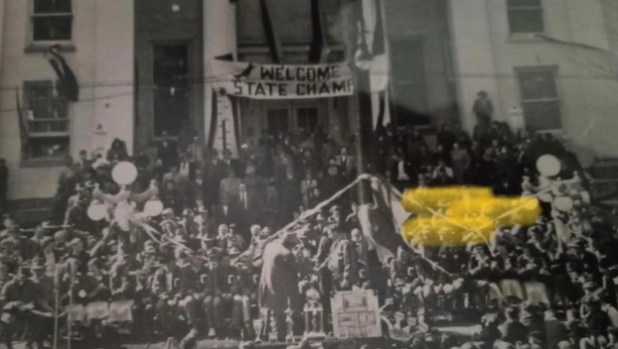 Photos from this post come are from the 1951 parade when Cards last won the state tournament. According to Winchester Mayor Ed Burtner, these photos are from Steve Justice’ father —Willis Justice —Justice Elementary was named after Willis Justice. If the Sun or a citizen can photograph similar images from Saturday’s parade, it would be interesting to compare the historical photos to the modern day photos — scenes that echo an eternity as part of Clark County’s history.

Saturday’s parade is downtown beginning at 6 p.m. at Depot Street and it will end at the courthouse where a ceremony will take place honoring the coaches and players. Police will block streets and the area around the courthouse.

Parade will feature the boys’ basketball team, cheerleaders, GRC band, along with police, fire and sheriff’s departments. A proclamation will be read by the students testifying to GRC hoops’ success.

Come out to celebrate and recognize the triumphant team!