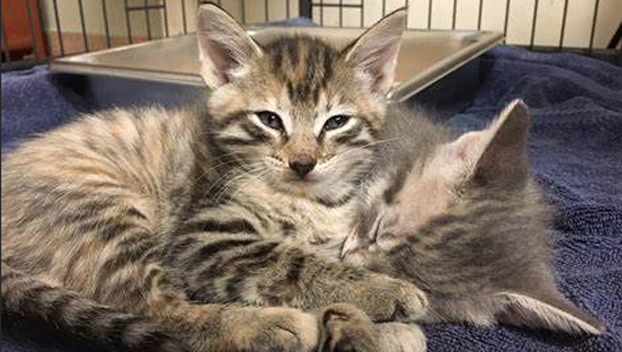 The cat spay and neuter program operates year-round and is divided into tiers. Feral or mostly outdoor-owned felines are eligible to be sterilized for free if they have an ear tip. For persons making less than $33,000 annually with an owned or feral cat, the cost is $20. The price for all others is $65.

Spring has sprung, and for many area residents, it is growing season, but for those who work at the Clark County Animal Shelter, this time of the year goes by another name, kitten season.

“This time of year is usually when shelters are exploding with litters of kittens,” said the shelter’s director, Adreanna Wills.

The reason for that is many rescue organizations are behind on kitten rescues during the winter months and that cats are ready to reproduce at such a young age.

“A lot of people don’t realize how early cats can come into heat. Routinely it is around the six-month mark, but some cats will come into heat as early as four months old,” Wills said.

Cats also breed throughout the year, and the best way to keep the population under control is for local residents to spay and neuter their feline friends.

Luckily the shelter can help with that.

“We have a low-cost clinic that is available to city and county residents,” Wills said.

The cat spay and neuter program operates year-round and is divided into tiers. Feral or mostly outdoor-owned felines are eligible to be sterilized for free if they have an ear tip. For persons making less than $33,000 annually with an owned or feral cat, the cost is $20. The price for all others is $65.

The price also includes an FVRCP and rabies vaccination.

Several years ago, the shelter used funds obtained through grants from The Joanie Bernard Foundation and the Bluegrass Area Development District to expand its already existing voucher program. The grant specifically targeted the outdoor cat population since they are more likely to breed.

The program was successful enough for the shelter to partner with the city of Winchester to expand the service to owners of indoor cats at a low cost.

Boonesboro Animal Clinic in Clark County and Woodstock Spay & Neuter Clinic in Lexington also assist with the program.
Wills offered advice on what area residents can about feral cats in their neighborhood.

“If there are established cats in an area–adult cats that are pretty self-sufficient that a couple on the street may be feeding–which want to make sure they are spayed and neutered,” she said.

After that, the cats are OK to continue their residency.

“They are accustomed to that, and there are plenty of people in the neighborhood that love them. The thing is that if you remove those cats in all likelihood, other cats will end up showing up in their place,” Wills said.

Having the animals fixed will keep the population under control, reduce fighting over territory and neutralize the spread of disease.

The shelter also owns a spay and neuter program for dogs for $25 with proof of annual income that is less than $35,000.

The price includes the surgery, rabies and DHPP vaccination, and nail trim. All dogs receiving a vaccine will also obtain an $8 county license.