Win City turns out to celebrate the 2022 state champs! 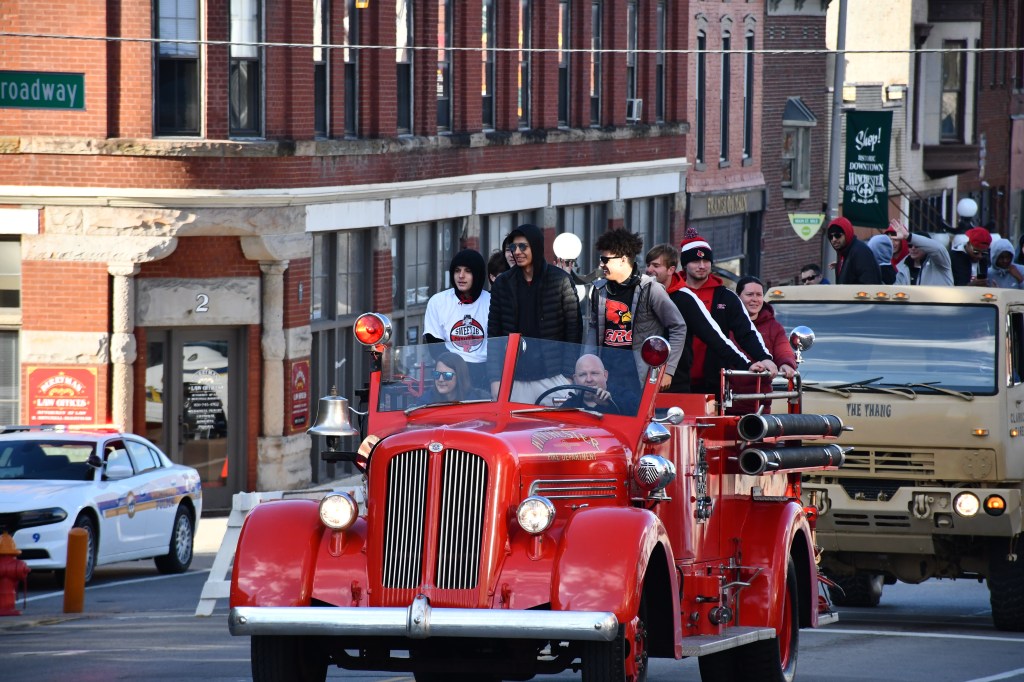 A crowd clad in black and red braved an unseasonably cold Saturday to celebrate like it was 1951.

That was the last time that Winchester and Clark County held a parade to honor a boys’ state championship basketball team, and the 2022 champs rode in style: in firetrucks, to be precise.

The George Rogers Clark cheerleaders and the marching band made up the champion’s vanguard before arriving at the Clark County Courthouse for a special ceremony.

The conquering Cards had a special proclamation from Judge-Executive Henry Branham and Mayor Ed Burtner read in their honor by Emma Burns.

Before that, Superintendent Molly McComas told the team and the crowd that sports create a sense of community.

“Attending sporting events creates energy, relationships between parents, neighbors, neighbors, teachers, and community members. It gives us a chance to come together and champion our youth. It gives us an opportunity to connect with an extended family,” McComas said.

Keene is in awe of the Cards’ historic season and the way they conducted themselves on the way to the state title.

“They showed class, respect, and integrity. That is what I am the most proud of. They did it and they did it the right way,” Keene said.

The Cards’ head coach, Josh Cook, thanked the community for its support.

“You see a community come together for a common goal of supporting young men chasing a dream. I’m blown away,” Cook said.

Cook, who has guided GRC to three KHSAA Boys Sweet 16 appearances, said that his team deserves the credit for ending the school’s 71-year championship drought.

“The reason why is that they are different in their own way. Each one of them is different. A different personality and a different background. They all handle things different, and as coaches, our job is to adjust for those guys,” Cook said.

Even when the team made mistakes, Cook said that the community pushed the young men to “fall forward” and that, as a result, they made a choice to make the sacrifices necessary to win.

“They chased the dream together,” he said. “It’s a special team, and we got to see that every day.”