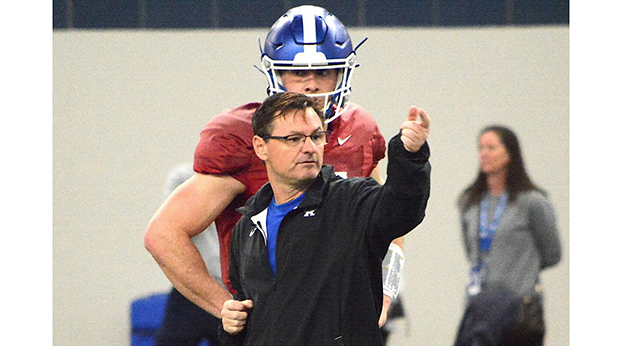 LEXINGTON, Ky. (KT) — Rich Scangarello is just getting started implementing his scheme this spring and he said the Wildcats are
catching on fairly quickly.

The first-year Kentucky offensive coordinator has been impressed with the team’s ability to transition from Liam Coen’s scheme to his playbook, which includes a throwback look with a fullback, or H-back, in the backfield. Justice Dingle, a converted defensive lineman, has been getting most of the reps at fullback.

“Ultimately, the exciting part of college football is not a lot of people face it,” Scangarello said Tuesday. “That gives you an advantage when they don’t know how to fit the run or things you can do to help run the football and or spread people out with a guy whose versatile and can create matchups in space.”

In an open practice for media members on Tuesday at Nutter Fieldhouse, Scangarello wasn’t pleased with the offense and said the workout was a “little rough.”

“We weren’t nearly as sharp as we’d been,” he said. “(The) defense did some good things. They put some new stuff in. We weren’t quite on point with (our schemes). … As long as we take care of the football, the other stuff we can always fix schematically and all that other stuff. So that’s the biggest point today that I thought the ball was on the ground. A couple of times we threw picks. Those are things that can’t happen.”

The offensive unit led by veteran quarterback Will Levis and running back Chris Rodriguez, had its struggles, but Scangarello credited Brad White’s defensive unit for providing a challenge so far this spring. He compared the scheme to what he witnessed while quarterbacks coach for the San Francisco 49ers.

“I love his defense, so we talked we’ve been talking about it quite a bit, actually, it reminds me of kind of the trend of the NFL right now, and we’ve had some discussions,” he said. “It’s not everyone (that) understands it. Not everyone can teach it. It has a lot of intricacies. It’s very detailed. It’s pro-driven and kind of the (same) the NFL is.”

Scangarello has a task on his hands at wideout with the departure of Wan’Dale Robinson, who declared for the NFL Draft following his lone season with the Wildcats.

“Nobody has a starting spot right now,” Harris said. “Everyone’s longing and itching to get noticed.”

The running backs also will see plenty of action in Scangarello’s offensive attack.

“I think it’s a very important part of any offense, and I think we have the guys to do it,’ he said. “Actually today that was a little bit off. We’re trying to achieve some stuff, but we’re also trying to manage (Rodriguez) and let the other guys see what they can do as well. But I think he’s got a real ability to catch the ball in the backfield. “

Going into the final week stretch of spring workouts, Scangarello is confident the team will continue to build on its successes.

“I felt like we’ve made strides, but you can’t be taking steps back, and that’s the maturity of your leaders, the maturity of your group. And as coaches, we have to do a great job and making sure we coach at a high level so that they understand that and they can execute,” he said.

The annual Blue-White game is set for 1 p.m. on April 9 at Kroger Field.