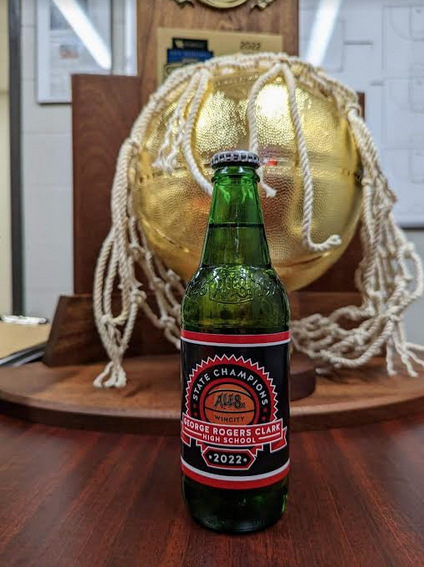 When you buy an Ale-8 at the Kroger grocery store in Winchester, go up to the counter and show the clerk your receipt, then pick up a specialty label to attach to the bottle. No other location has these awesome labels.

Bottle features the school’s colors — red, white and black — and the year the Cards conquered — 2022.

“Marketing team was excited that GRC won, so we suggested that the bottling company create a specialty label,” Kevin Price, chief marketing officer. “I said ‘let’s get this done’ so we turned this around in a few days to celebrate the Cards’ win.”

Founded and bottled in Winchester since 1926, “Ale-8” is the only soft drink invented in Kentucky still in existence, according to the company’s website. Deemed “Kentucky’s Official Soft Drink,” this ginger and citrus flavored soda was inspired by ginger-based recipes from northern Europe. Ale-8 can be described as a ginger soft drink with a “kick.”

Company gave the team, school administrators and surviving members of the GRC state championship team 1951 bottles with the special labels.

Now that is hometown pride!