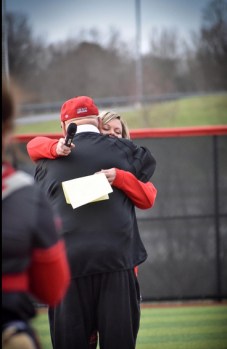 Cards have scored four wins, the latest being an 11-0 shutout against Powell County.

“We are 4-0 and playing very well! We are hitting the ball well and playing with great energy!” Cards’ Coach Connie Hill said. “Girls are stepping in when needed to cover injuries and buying into WE not ME! We are off to a great start and plan to keep it rolling next week with the District matchup facing Paris on Thursday! We are gearing up to leave for the spring break as well to play some ball at the beach!”

Cards’ Ashley Martin pitched a complete shutout against the Pirates (1-5) on Thursday (March 24).

The Cardinals opened up scoring in the first inning, when an error allowed two runs for the hometeam.

Cardinals notched four runs in the third inning with batters contributing to the big inning that included Meredith Fryman, Simone Campbell, and Emily Schooler, all knocking in runs.

Cards’ Martin earned the victory in the pitcher’s circle. The ace allowed five hits and zero runs over five innings, striking out three and walking one.

Dessa Foster took the loss for Powell County, allowing seven hits and 11 runs over four innings, striking out two.
Cards had seven hits in the game.

In other softball news, Cards paid tribute to former head Coach Jackie McCloud, who guided the hometeam for many years.

“I can’t thank you enough for all you have done for me through my softball career!” said current Head Coach Connie Hill, who played for McCloud back in the day. “From the time I backed my jeep into mom’s garage and you rushing over to fix it before she got home, never mentioning a word all these years… Guess she knows now! You have taught me so many lessons in life and I know running up and down that hill at the field of dreams helped me remember those lessons! Those long bus rides with you behind the wheel are some of my favorite memories, even when we lost and we rode back in silence with you flying those back roads! I told you on my Senior night that I was taken over after you retired! It may have taken me a few more years but look at us now! You are the reason Clark County is what it is today! You were tough, but so were we! You prepared us for more than softball, you helped us prepare for life. The same love and hunger that I have for the game is now running through the hearts of so many softball girls and that’s because of you! I am forever grateful for you Coach!”