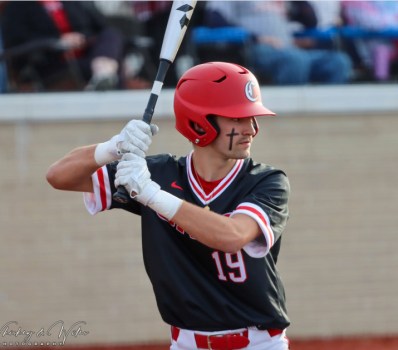 Cards' Ben Dawalt is poised to hit the fast pitch hard, maybe over the fence. (Photo by Whiskey and Wiles Photography)

They’ve begun with a 2-3 record, prior to Thursday’s game against Estill County.

South Laurel was able to score four runs in the first and two in the second before GRCHS scored two of their own in the 3rd to cut into the lead. South Laurel then scored two in the 4th to regain a 6-run advantage, which they would hold onto throughout the game.

Two days later, against Bluegrass United, the Cards got their first win of the season by a convincing 13-5 score. The Bluehawks had a 3-1 lead through three innings, before the Cards exploded with 10 runs in the 4th inning to capture an 8-run advantage.

Though two more runs were scored by each team, the Cards were able to maintain their 8-run edge. They held their opponent’s offense to a .130 batting average, while leaving their pitching with a .933 ERA.

The Cards’ third contest of the week – and first away game – took place at Perry County Central in Hazard. In a close game, the Cards were defeated 6-5 in 9 innings.

A scheduled Saturday afternoon home game against Scott High School was postponed to an undetermined date due to inclement weather.

This week, in a matchup against Bryan Station, the Cards fell to the Defenders 4-3. Zack Brookshire struck out six batters through 4.2 innings of pitching, while Caden Spicer batted 2 for 4 with a pair of RBIs. Carter Maynard and Grayson Gough also delivered hits for the Cards.

They got back to their winning ways on Monday in a 9-8 victory against Tates Creek (5-6).

Last note, for top notch photos, particularly of Cards’ sports like the ones featured with this story, see http://www.whiskeyandwiles.com/