Past Meets Present; The Celebration Continues 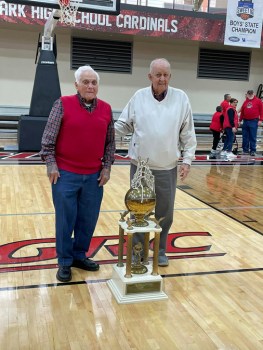 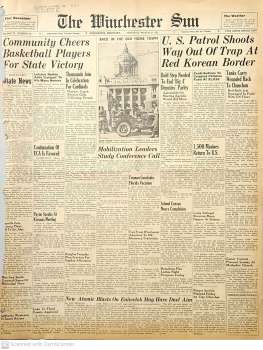 Winchester Sun from 1951 after the Cards won the state title. 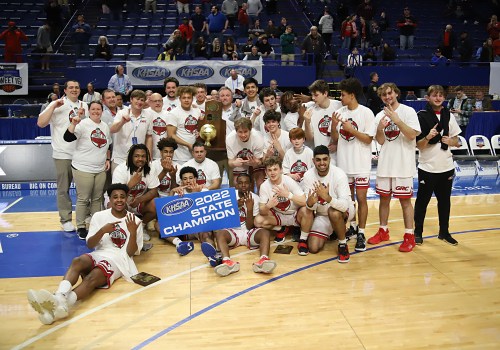 The state championship celebration continued into its second week.

The 2022 KHSAA Boys State Basketball Champion George Rogers Clark Cardinals were feted from the halls of local schools to the floor of the Kentucky House of Representatives.

The week’s highlight was a celebratory pep rally on Monday at a packed GRC Arena with some distinguished guests in attendance.

Virginia Ross and Christine Hall, and representatives from the families of their teammates, represented the past.

Ritchie said he thought it was good for the past to meet the present at the rally.

“We also thought it was important for our 2022 basketball team to see some of the 1951 team where they achieved the same goal at the end of the year,” he said. “It put perspective that this happened 71 years ago–the last time Clark County won a state championship–and how big of a deal it is that they accomplished.”

The 1951 Cards, led by hall of fame coach Letcher Norton, had a tremendous Sweet 16 pedigree. Members of the squad were on state runner-up teams in 1950 and a third-place finisher in 1952. In the late 1940s and early 1950s, the Cards ripped off a run of six straight Region 16 crowns.

The current Cards were excited to meet Puckett and Thornberry.

“They could tell that they met up to their standards, I guess you could say a little bit,” Ritchie said. “They shared a common dream together … They know how hard they worked, and they knew back in 1951 that they had to work just as hard to get there like they did this year.”

Earlier in the day, the Cards paraded up and down the halls of each local school.

On Tuesday, the Cards were honored on the Kentucky House of Representatives floor by Rep. Ryan Dotson.