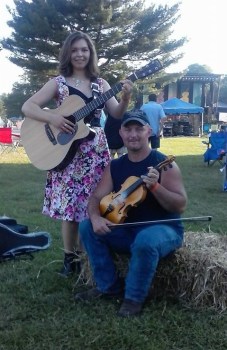 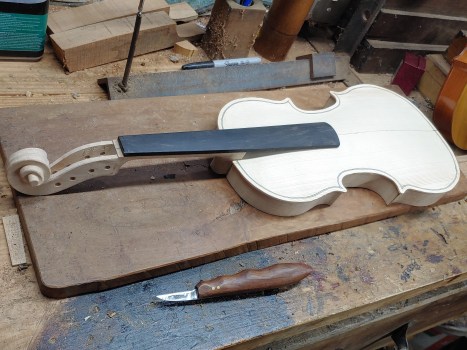 Pattern for a fiddle. 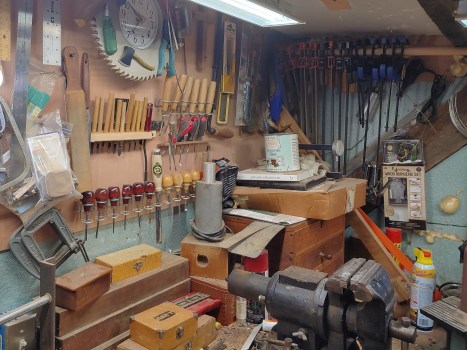 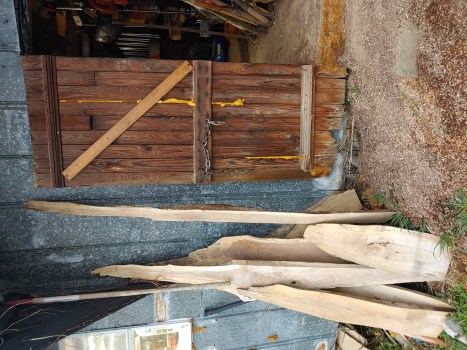 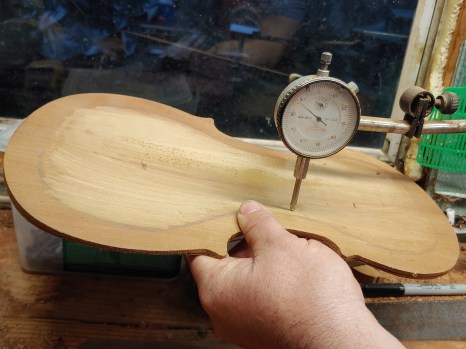 James using a device he invented to measure the thickness of a fiddle front. 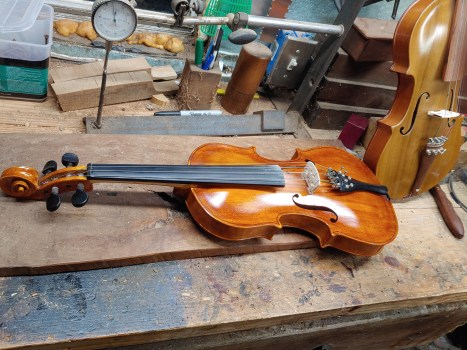 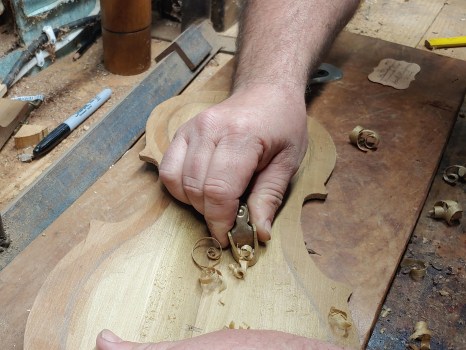 James working on the back of a fiddle front using a min-plane.

“The sound that comes out of an instrument reflects the love put into it” — Scott James, quoting luthier and Bluegrass music legend Homer Ledford

After the curve, just before arriving in the tri-county (Grant, Scott, and Harrison) community of Corinth, off to your right is the green metal-roofed tiny home of master luthier (a maker of stringed instruments such as violins or guitars) Scott James and his rural mail carrier wife, Katie.

A hard right, through the wide aluminum gate—left open in anticipation of the arrival of my wife, Jeanine Lister, and me—put us on the short narrow path (driveway, actually) to a parking space above their hillside house.

Getting out of our red Camry left us a short walk from their house and Scott’s workshop. Between us stood a dog house ‘guarded’ by a happy-to-see-you black Labrador and Pyranee-mix named Dixie. Almost instantly, after the car stopped rolling, Scott and Katie came out to greet us—with Katies’ hands filled with cookies to distract Dixie—as we walked toward their house.

The house and shop were perched hillside above their 10-acre farm with some pre-James terraced land at the top, above, some still brushy territory between the house and a barn, flat land spreading out below that; the railroad tracks forming the boundary of the land.

“We put our house here,” Scott James explained, “because this is where the foundation of the previous house was. There’s flat land at the bottom of the hill, but it’s awfully close to the railroad tracks.”

As she and Scott ushered us into their house, Katie implored us to “ignore the mess.” There was no mess, though. Their house had two cats, one a large orange tom named Milo and a smaller (but certainly not tiny) black and white cat named Birtha, who stayed on the bed, not far from Katie Meanwhile, Milon stayed under Scott’s feet—where, even using work boots, Scott managed to gently rubbed the tom’s belly and back as he talked with Jeanine and me.

Katie took up a place on their bed. Scott in a low side chair not far from the front (and only) door. Jeanine sat in the comfortable raspberry sherbet-colored wing backed chair between the bed and the stove behind us. I perched myself on the remaining seat, a low faux leather, thickly padded, steel stool directly in front of the stove door, not far from the sink. Had we chosen, the four of us could have held hands to say grace.

There was no table. A bathroom, storage, and refrigerator were behind me. Storage, in the form of wide shelves, were above our head, around nearly all of the house. The house felt a bit crowded for four people and two cats, cozy if Jeanine and I had not been there. Messy, the house was not. Everything appeared to have its place and everything was where it should be.

As Katie did genealogical research on Ancestry, Scott entertained us and for an hour he discussed how he hand builds his musical instruments. After that, Jeanine, Scott, and I went out to his workshop where for two more hours he showed us his tools and told and demonstrated for us how he built those instruments.

Today Scott regularly builds “fiddles, violins, I guess most people call ‘em.” But he also does custom orders of mandolins, violas, upright bases, and guitars. So far he’s made more than 80 mandolins and close to 50 fiddles.

At 40, Scott James has been playing music since he was “a youngster” because he comes from a family of musicians. His parents both played in bluegrass and country bands while he was growing up. Then when Scott, his brothers Paul (called Bub), Robin, Daniel and sister Angela (called Ange) were old enough they formed the James Family Singers and played at festivals and recorded albums. Today it is Scott and Katie who perform together. The family band has been broken up by tragedies and accidents.

“I guess I was about seven when I started helping my dad. Doing small things. Then when I was 14 I built my first mandolin. I’d go to festivals and shows with my dad. Met Homer Ledford at one. When I told him I’d made a mandolin he told me to bring it the next time and he’d give me suggestions, some pointers. I did. Each one was a little better than the last because Homer’d give me advice about how to improve ‘em. ‘Make this a little thinner,’ he might say about the top. And so on..

“But the best advice he gave me was to put love into what you make. The love you put into each instrument comes out in the tone.”

Leaning up against the outside wall of his workshop was wood which James explained he lets age for one year per inch of depth. So a one inch piece will age for a year, outside. Then he’ll move it inside, someplace it can’t get wet—a barn or his workshop—and let it age another year. About the wood, James told me that the first year loosens the wood up a bit, helps get the sap out. After the second year, he can make something out of it.

Ledford advised that he always use quarter sawn wood.

“On my first mandolin I used flat-cut wood. That wood was hard to work, and the sound wasn’t as good either. So now I only use quarter sawn wood.”

Pictures accompanying this article show how Scott James hand-makes his fiddles. Total time to make a single instrument is about 280 hours per violin. He sold his first mandolin for $500.

Today, twenty-five years on, James sells his fiddles under the name Otis Violins. At this point he is focused on making fiddles because they’re what he most loves to play. However, on a custom basis, James still makes mandolins, violas, upright bases, and guitars.

He and Katie perform regularly as “Kornerstone” at venues throughout Kentucky, including Renfro Valley and at a wide variety of music festivals.