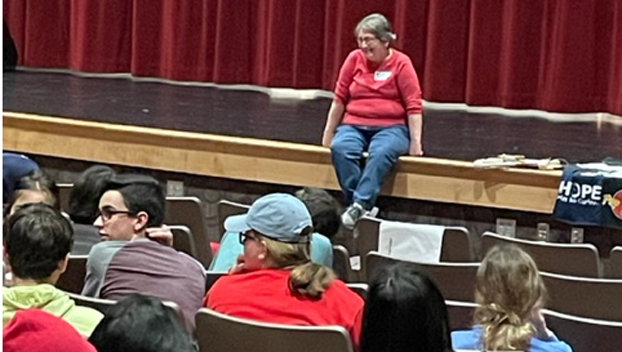 Jane Hines talks about the loss of her son Matt, who became addicted to drugs. She said actions always have consequences.“I promise you whether it’s to stay away from the drugs you choose to go with, again, you have got to face the consequences that what this is all about is realizing that there are consequences to everything you do,." (Photo by Miles Layton)

The story of his tragic death from a drug overdose also served as a cautionary tale for students attending the “Truth or Consequences” event.

“Matt was in the band and very good at what he did. He played drums in the marching band,” Hines said about her son’s time at GRC.
Hines said Matt was “kind of a hippie” and loved retro things. He was involved in many church young groups and served on mission teams.

Most important all, Matt was a tremendous friend.

“He helped a lot. He was one of those guys with his friends. He was the go-to guy. When they had a problem and needed to talk to somebody, ‘Just go see Matt,’” she said. “And he was a good listener, and he didn’t always have answers, but he was there for you.”

Things changed when Matt started hanging out with a different crew of friends.

“He started smoking some weed, and you know I was the kind of parent that was like, ‘You know, I don’t like it, but now that’s not the worst thing we have to deal with,’” Hines said.

After Matt graduated from GRC, he moved to the west coast and settled in San Francisco, California where his situation worsened.

Years later, he moved to Denver, Colorado, to live with a friend, but in 2014 Hines received the call no parent ever wants to get.

“It was one of his best friends. In fact, it was the one that drove him, and he said, ‘I need to talk to you.’ I thought, ‘Oh boy, you got trouble, got arrested or something.’ And he said, ‘He’s not with us anymore.’” Hines recalled.

The news left Hines distraught, and she had to be taken home from her job.

“It was a living nightmare. Have you ever had are so real that you thought it happened? That’s how this was, but it did happen,” she said.

There were a few things that Hines wanted to impress on the students.
The first was simple.

“Whether it’s your real parents or foster parents or grandparents or whatever, somebody cares,” Hines said.

The second is that actions always have consequences.