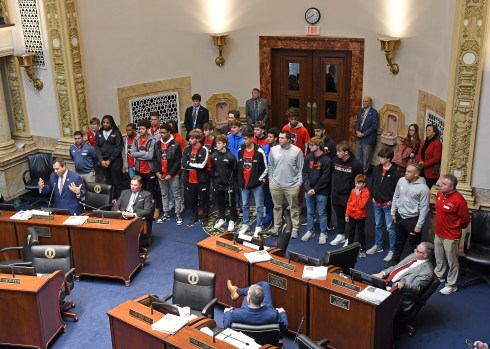 Senate Resolution 278 pays tribute to the players and staff of the state championship team. (Submitted photo)

I have been trained to handle long nights and heavy workloads as a physician.

But, I have to admit, I feel a bit tired as we enter the veto recess period with the conclusion of week 13 of the 2022 Kentucky General Assembly. We worked late to ensure critical legislation was sent to the governor ahead of the veto period. The House and Senate passed over 100 bills this week.

The veto recess period allows the governor to review and consider the legislation the General Assembly has passed. My colleagues and I in the state Senate and state House of Representatives will return to Frankfort for the final two days of this session on Wednesday, April 13, and Thursday, April 14. Then, we have reserved the opportunity to override any governor’s vetoes on the bills passed by the General Assembly. We will still have the chance to pass additional bills, but their vetoes cannot be overridden.

The Senate played a significant role in each of these critical bills. I am pleased with what each of them means for the future of our state and our district.

The state budget bill cleared the Senate without a single vote in opposition. This is a testament to the diligent and careful planning of the bill over the past several weeks. Hundreds of hours have been invested into crafting the state’s spending plan, with careful consideration of the best interest of Kentuckians in mind. An investment of Kentucky taxpayers’ time and energy made the funding opportunities outlined in these budget bills possible.

Despite the many challenges thrown our way these past two years, the spending plan for the next two years took advantage of the unique funding opportunities available while remaining fiscally responsible and conservative with our precious tax dollars. We are addressing the issues from COVID-19 and natural disasters head-on and investing in our state employees like never before with significant pay raises.

We are making further historic investments in education, paying well above the required amount into the state teacher pensions once again, and providing school districts with financial relief by assisting with transportation costs and funding all-day kindergarten. The final budget will help create a safer and brighter Kentucky home for our families and children.

Even though week 13 only consisted of two legislative days, it was undoubtedly the most productive of the session regarding the number of bills making their way through the process. I was happy to support several bills that reached the governor with the Senate’s fingerprint on them.

● House Bill 3 is a pro-life measure referred to as the Humanity in Healthcare Act. I had the pleasure of carrying this bill through the state Senate. It addresses several aspects of abortion, including access to abortion-inducing drugs. After a December 2021 policy shift by the Food and Drug Administration, these drugs are now readily available through online websites with limited oversight and accountability. This bill corrects this troubling problem. I am also happy to say the Senate added an amendment to the bill banning abortions when the baby’s gestational age is beyond 15 weeks.

● House Bill 290 is the state House of Representatives’ version of a bill I introduced in the Senate, Senate Bill 129. House bill 290 provides crucial procedural protections to students accused of violations of a public college or university’s student code of conduct that could result in a suspension or expulsion. These are due process protections that are sorely needed. The bill guarantees students are presumed innocent, given timely written notice of charges and specific details about the facts giving rise to the charges, provides continuous access to the administrate file and evidence in the institution’s possession, and ensures an impartial hearing.

● House Bill 8 is a tax modernization measure lowering Kentuckians’ income tax. It does so responsibly and will not blow a hole in state revenues. Income tax rates will be reduced by a half percent if specific criteria are met. Lowering income taxes is made possible by broadening service taxes to particular services.

● House Bill 9 is charter school legislation. I was proud to support this bill and have been an advocate for charter schools throughout my time as your state Senator. The legislature implemented the funding mechanisms for charter schools in 2017, but House Bill 9 is the next big step in providing more significant opportunities for Kentucky students and families. The bill establishes the first two publically funded pilot project schools, one in the west end of Jefferson County and the other in northern Kentucky. The bill also sets the parameters for districts’ ability to opt-in or opt-out of having charter schools and how enrollment will be determined.

● House Bill 607 standardizes the excise tax on every pari-mutuel wager placed in Kentucky, taxing all such bets off the top at 1.5 percent, eliminating the 15-cent per person admission tax our race tracks currently face, and more. The bill plays a critical role in the economy of our 28th District, while raising more money for the state’s general fund to go toward the valued government-funded areas in this year’s state budget.

● House Bill 315 further showcases the General Assembly’s commitment to improving broadband access for our rural communities. HB 315 mandates $182,769,000 from the Coronavirus Capital Projects Fund of the American Rescue Plan Act of 2021 (ARPA) and $67,231,000 from the ARPA State Fiscal Recovery Fund are to be set aside for the Broadband Deployment Fund. This crucial legislation will establish the Office of Broadband Development and clarify how the office is to administer and implement the Broadband Deployment Fund. Additionally, the bill allocates $20 million in new funding from the State Fiscal Recovery Fund to create the Rural Infrastructure Improvement Fund to replace utility poles for the construction of broadband networks.

I am also happy to inform you that legislation I was the primary sponsor of has also been delivered to the governor. Senate Bill 66, coined Nathan’s Law, is the bill I described in a previous legislative update. As the primary sponsor of this bill, I am happy to inform you that this legislation was passed and delivered to the governor. The Burnett family initiated the bill, who are my constituents, contacting my office detailing the tragic loss of their son, Nathan, and the grief they faced.

Senate Bill 66 takes the necessary step to provide further consideration to the grieving process of families by implementing requirements on how the news of a loved one’s death must be delivered. Within three years of assuming office, coroners and deputy coroners must complete a minimum four-hour course that includes instruction on the grieving process and best practices for providing death notice to a spouse or next of kin. The bill also stipulates that news of the death must be delivered verbally and respectfully and requires a follow-up with the family member within 48 hours. Additionally, the bill would require emergency responders to be on standby.

I appreciate the help of Clark County Coroner Robert Gayheart in drafting this legislation, and I trust the bill will be signed into law by the governor.

I am grateful for the signing of Senate Joint Resolution 72 into law. I was the primary sponsor of this as well. The resolution directs the Cabinet for Health and Family Services to apply for a Medicaid waiver to provide supported housing for individuals with severe mental illness (SMI). Currently, 53 percent of adults under state guardianship are diagnosed with SMI and could benefit from services like staffed residences, group homes, family cares homes, personal care homes, medical respite care and supported employment.

I am eager for the implementation of the previously mentioned bills and others into law, as I trust they will continue to move our state forward in a positive way. I will keep you updated on the numerous bills pending a decision from the governor and, ultimately, those that may need further action from the legislature.

Also, as is my custom, I plan on providing community updates after this jam-packed session. More detail regarding the budget and transportation funding is forthcoming.

Please feel free to call me about these issues or any other public policy issue toll-free at 1-800-372-7181 or email me at Ralph.Alvarado@LRC.ky.gov.

Two huge congratulations are in order!

First, I want to congratulate the George Rogers Clark Cardinals for capturing the 2022 Boys’ State Championship, the first for GRC since 1951 and the second state championship in school history. The team lost only a single game all season. That is an incredible achievement and an unforgettable experience for these young men, the school, and the entire community. I was proud to be joined by the talented players and staff in the Senate Chamber on Tuesday, March 29, where the team was honored with Senate Resolution 278.

Secondly, congratulations to the Montgomery County High School Mock Trial Red Team on becoming the 2022 Mock Trial State Champions. The team is led by dedicated coaches and a bright young group of young men and women. They were honored with Senate Joint Resolution 283. I was honored to be joined by them in the Senate as well.

Senate District 28 is the district of champions!

Senator Ralph Alvarado (R-Winchester) represents the 28th Senate District, including Clark and Montgomery counties and the eastern portion of Fayette County. He serves as chair of the Senate Standing Committee on Health and Welfare. He is also a member of the Senate Standing Committees on State and Local Government and Banking and Insurance. He is a liaison member of the Budget Review Subcommittee on Human Resources. Additionally, Senator Alvarado serves as a member of the Medicaid Oversight and Advisory Statutory Committee and the Administrative Regulation Review Subcommittee.